Blade of the Oni | Illustration by Jason A. Engle

Reconfigure is one of the main set mechanics of Neon Dynasty as a means of giving life to equipment that you can turn into independent creatures or powerful equipment. The mechanic reminds me of Theros’ bestow with the ability to switch between modes at will. A flavorful mechanic that illustrates the sentient machines present in the cyberpunk world of Neon Dynasty, these creatures can be tools for others or threats on their own.

Reconfigure is a mechanic that takes a minute to understand, but it makes sense once you put the cards in your hands a lot like bestow. So let’s dive into explaining how this new mechanic works and some of the interactions that may confuse players!

How Does Reconfigure Work?

When you cast a creature with reconfigure, it enters the battlefield as an artifact equipment creature and functions just like any other artifact creature. You can then pay the reconfigure cost to turn the creature into an equipment and attach it to a creature you control.

You can pay the reconfigure cost again and the card will return to being a normal artifact equipment creature.

The History of Reconfigure in MTG

Reconfigure debuted in Neon Dynasty so it’s only appeared in that set and the accompanying Alchemy release for that set. Since we’ve only seen this mechanic in one paper set it isn’t classified as evergreen.

Is Reconfigure an Activated Ability?

Reconfigure represents two activated abilities depending on the current state of the reconfigure card.

You can only reconfigure at sorcery speed.

Does Reconfigure Count as Equip?

While reconfigure attaches the equipment to a creature, it doesn’t actually count as equipping for cards that specifically reference equipping a creature.

Can You Kill an Equipped Creature with Reconfigure?

You can kill an equipped creature with reconfigure the same way you could kill any normal piece of equipment. If the equipment itself is destroyed then the reconfigure creature goes to the graveyard.

Can You Reconfigure a Tapped Creature?

You can reconfigure a tapped creature since the ability doesn’t require you to tap the card to activate it.

What Happens When a Creature with Reconfigure Dies?

Does Reconfigure Work with Puresteel Paladin?

Reconfigure does work with Puresteel Paladin since all creatures with reconfigure are equipment. So you can equip a creature with the Paladin ability, but you’ll need to attach the reconfigure card to another creature first before being able to unattach the creature via reconfigure.

Does Ardenn Work with Reconfigure?

Blade of the Oni

Seeing play in Pioneer mono black aggro decks, Blade of the Oni is the only mythic card with reconfigure. While it’s only used in one Pioneer deck the power level of this card is higher than nearly any reconfigure card outside the other two on this list.

Deemed the white Scavenging Ooze during preview season, Lion Sash is a great addition to white decks in any format. It’s still seen enough play to warrant a mention on this list even if it hasn’t seen as much play as predicted during spoiler season for the set.

The Reality Chip is the best card with reconfigure in terms of playability and a major part of why Azorius () Hammer in Modern has seen a resurgence after Lurrus of the Dream-Den’s ban. While this card mostly found success in a single archetype, breaking into Modern and changing up the base of an existing and powerful archetype without coming from a Modern Horizons set is quite the feat.

New mechanics have a difficult tightrope to walk when they first come out. They dominate their respective formats and are unfun if they’re too powerful, but if they’re too weak they just don’t see any play. Reconfigure walks that line very well, giving us several playable and even multiformat staples while not being overpowered. The first few times you see reconfigure can be a little daunting, but the mechanic plays out very intuitively once you’ve played with it a few times.

I’d be happy to see more reconfigure cards in the future. I think they may have trended a bit conservatively on power level for this first outing, but even cards like Lion Sash and The Reality Chip have managed to find homes.

Let me know in the comments down below what your favorite reconfigure card is and what you want to see for future reconfigure cards. And be sure to check give us a shout over on Twitter if you have more to say.

Thanks for reading and stay safe! 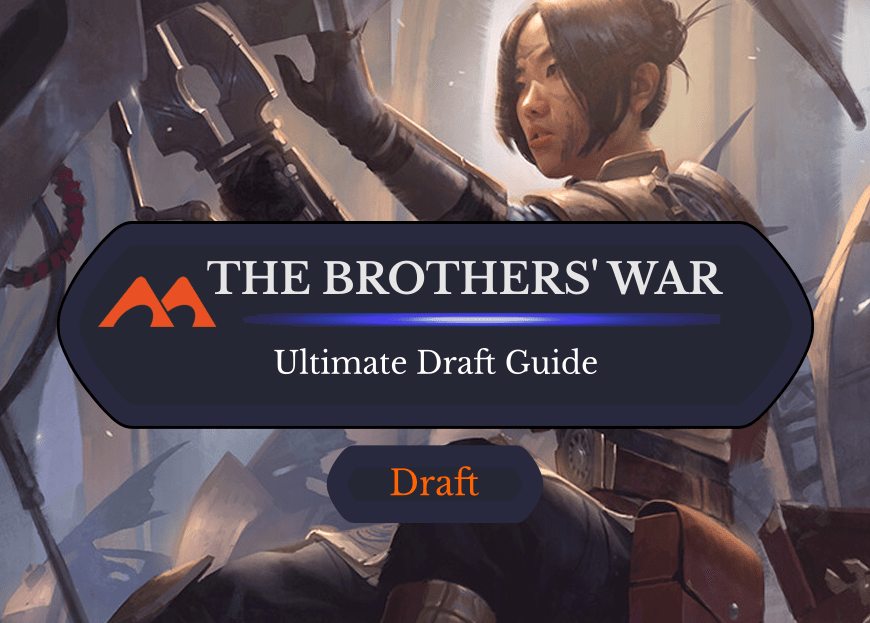 The Ultimate Guide to The Brothers’ War Draft