Welcome planeswalkers! I’m here to help break down another keyword that may be valuable in your Limited and Constructed strategies. Today we’ll be talking first strike. This evergreen keyword can change the course of any combat and may just give you the advantage you need.

So, let’s dive in and answer many of the burning questions you may have. Does first strike stop trample? What are some of the best cards that have first strike? Is first strike good? Let’s find out!

How Does First Strike Work?

A creature with first strike deals combat damage before any creature that doesn’t have first or double strike.

According to the MTG Comprehensive Rules rule 702.7a: “First strike is a static ability that modifies the rules for the combat damage step.”

The History of First Strike in MTG

First strike has been a keyword since the inception of MTG. It was introduced in the Alpha set that was released in 1993. Since then, first strike has appeared in every color and almost every set released afterwards.

First strike was adopted as an evergreen ability, which means that it may be used in any set and often doesn’t have any reminder text to explain the ability. Artistically, first strike is a keyword to signify that a creature has speed, skill, or can attack from a longer range.

Can You Block a Creature With First Strike?

Can You Have Multiple Instances of First Strike?

Can a Creature Have First Strike and Double Strike?

How Does Double Strike Work Against First Strike?

How Does First Strike Work With Fight Effects?

First strike doesn’t have an effect on fight spells. First strike allows a creature to assign combat damage on a different damage step than normal combat. Spells that cause creatures to fight aren’t considered combat damage, so the first strike keyword doesn’t change any damage assigned.

How Do First Strike and Deathtouch Work Together?

A creature with first strike and deathtouch may assign the minimal amount of damage to each blocker to destroy those creatures.

For example: I attack with Anaba Bodyguard and my opponent blocks with Abyssal Specter and Ageless Guardian. After blocks have been declared, I play Bladebrand. On the first damage step, my creature will assign one damage to each of the blockers, and because of deathtouch, they’ll both die before assigning their combat damage.

Does First Strike Work on Defenders?

Get behind the Wall of Spears! Yes, defenders can have first strike as a deterrent for those overly aggressive decks. First strike generally is more of an evergreen keyword attached to attacking creatures and aggro builds. However, a defender with high toughness and first strike is a tough blocker to get around.

What Happens if a Creature Gets First Strike After the First Combat Damage Step?

How Do You Use First Strike in MTG Arena?

MTG Arena automatically initiates the first combat damage step for creatures with first strike. The browser calculates the damage that should be dealt and during which damage step. Sit back and let the browser take care of the calculating for you. Just remember to play your first strike combat trick after blockers are declared and not after damage is applied.

What Are First Strike Counters?

First strike counters can be put on a permanent to give it first strike. Keyword counters were introduced in Ikoria: Lair of Behemoths. Since their inception, they’ve been added to most of the new sets as a way to give your creatures advantages instead of waiting for evergreen first strike creatures. 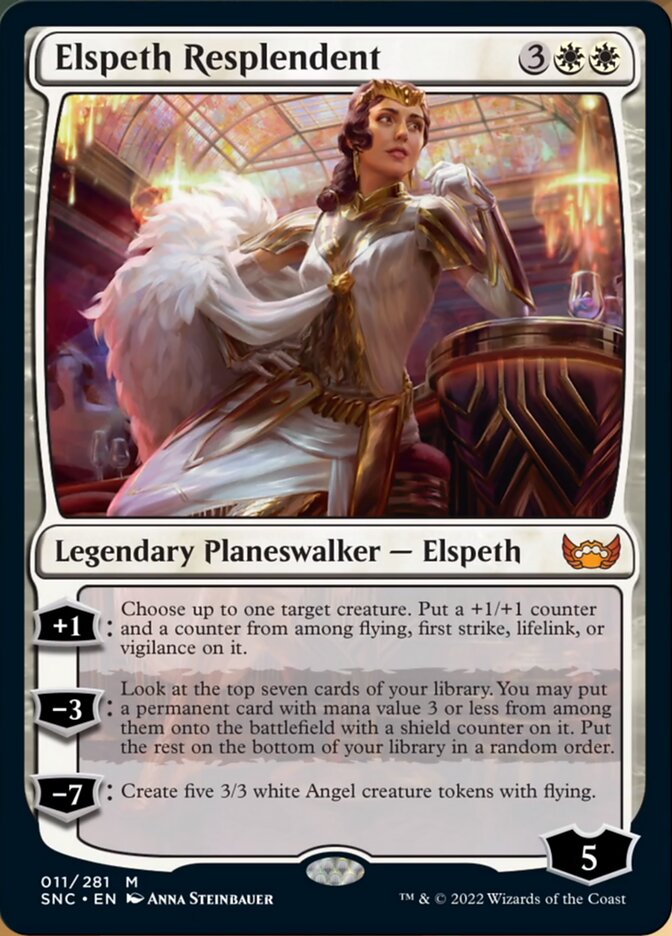 A perfect example is Elspeth Resplendent in Standard. She’s a great card to give some of your strongest creatures the extra boost of striking first.

How Do You Beat First Strike?

The simplest answer to this question is to have a blocker with more toughness than the power of the first strike creature. You can block a first strike attacker and destroy them if the blocking creature survives and on the second damage step has enough power to destroy the attacking creature. Removal spells and damage spells are always great ways to take out any creature as well. An opponent wants to be aggressive when they have creatures with first strike, so to counter this threat you just need to build enough defenses, use removal, or use combat tricks to slow them down.

What Is Firstest Strike?

Firstest strike was a famous hoax perpetuated on messaging boards about a fake card. The card was called Throat Wolf and it was said to be the fastest creature in MTG. Firstest strike allowed the wolf to assign its damage before even a creature with first strike. This “card” gained fame because of its elusiveness and the desire of players to see and use the card.

Many years later, Throat Wolf was printed as a test card in the Mystery Booster set. So, it’s still not technically a Magic card.

Yes first strike is a useful mechanic for certain deck builds. Many white aggro decks can overpower their opponents when pumping up cards like Baneslayer Angel and Thalia, Guardian of Thraben. First strike is an aggressive keyword and therefore can help many aggro builds. I’m also a fan of giving creatures first strike as a combat trick or to put pressure on my opponent. Cards like Maul of the Skyclaves and The Wandering Emperor are fantastic additions to take aggro decks to another level.

Outside of building aggro decks in mostly white and red, first strike doesn’t always bring enough advantage to situations. First strike creatures are still susceptible to all the removal spells unless protected. Control decks will often negate any of the advantages that first strike would give. 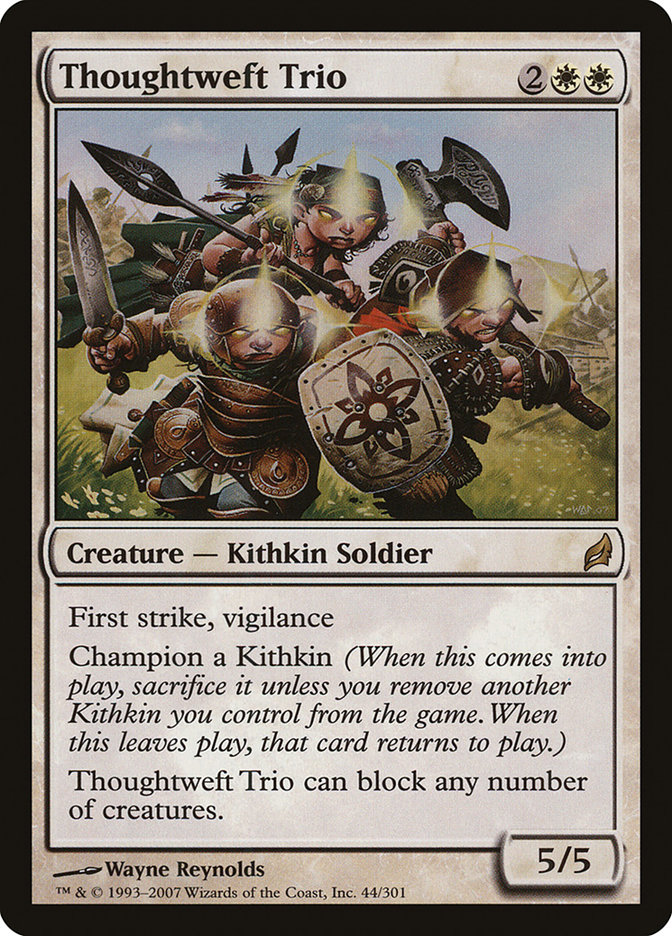 Thoughtweft Trio is just a fun card, but it isn’t great competitively. It might be fun to have a first strike Modern deck with Thoughtweft Trio, Figure of Destiny, and Brigid, Hero of Kinsbaile. 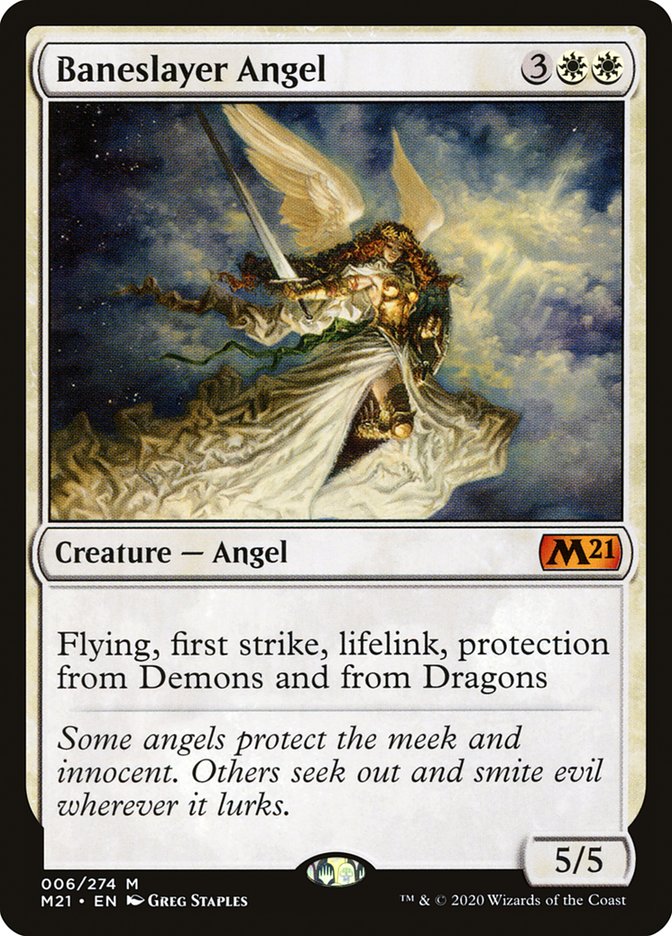 Baneslayer Angel sees play in white Commander and Pioneer decks. This angel brings upside to your board presence with first strike and lifelink in the later stages of a game, often as a great way to stabilize against aggro decks. 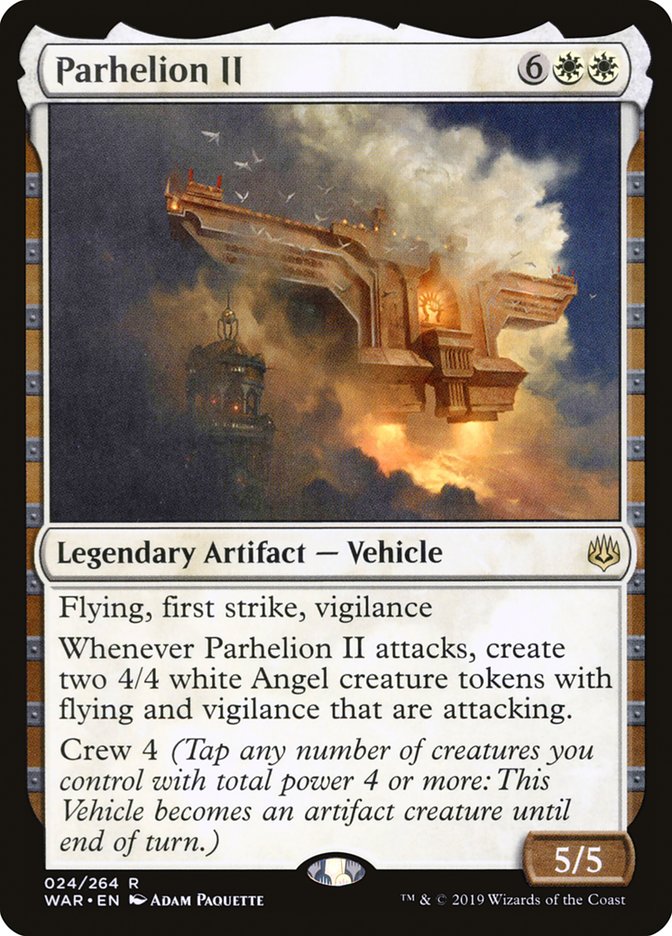 Parhelion II is an expensive card that’s so much more effective if you can cheat it onto the battlefield. Here’s where Mardu () decks running Greasefang, Okiba Boss enter in Pioneer. It’s a powerful combo with the chance of getting the bomb Parhelion II out on turn 3.

Not the strongest of the cards on this list, but a very popular card in Standard. Brutal Cathar is a must-have for white or Boros () aggro lovers out there. It’s easily one of the most popular (and frustrating) cards in Standard at the moment. 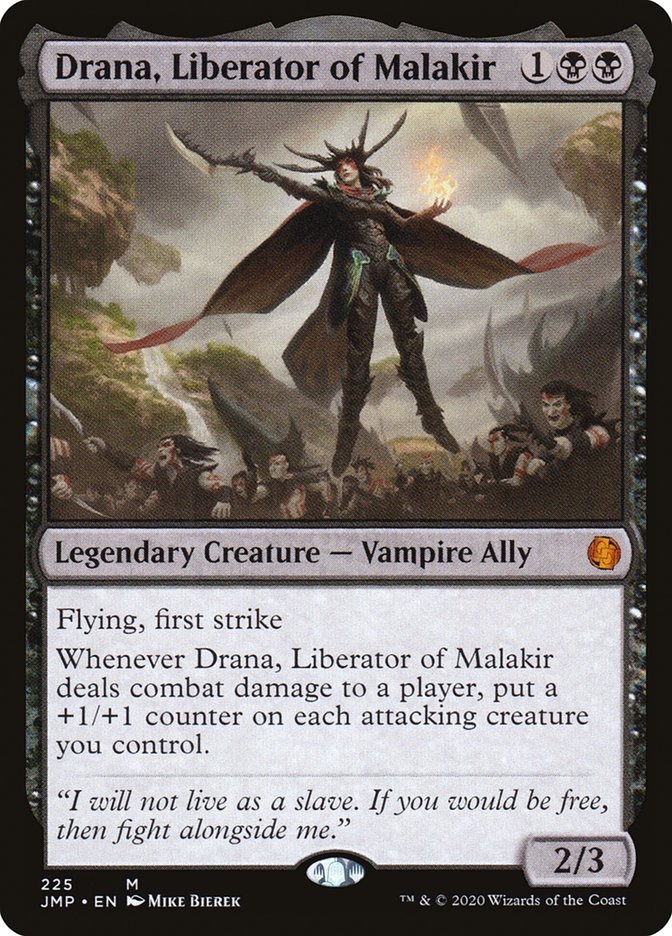 Drana, Liberator of Malakir helps pump your creatures whenever it deals combat damage to a player. The flying and first strike keywords will help assure a couple of turns of direct damage. It’s a fantastic addition to many black Commander builds. 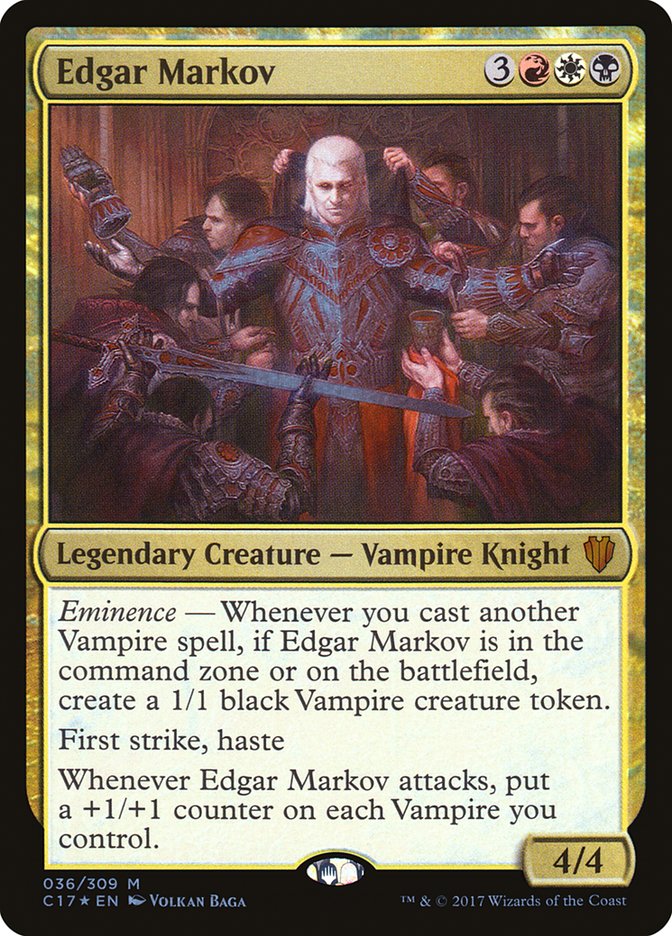 Speaking of Commander builds, Edgar Markov is my top suggestion for a commander with first strike. The number of cards and power that comes with vampire cards makes it a great tribe to pursue. Edgar Markov also has the major benefit of generating creature tokens, even while in the command zone. 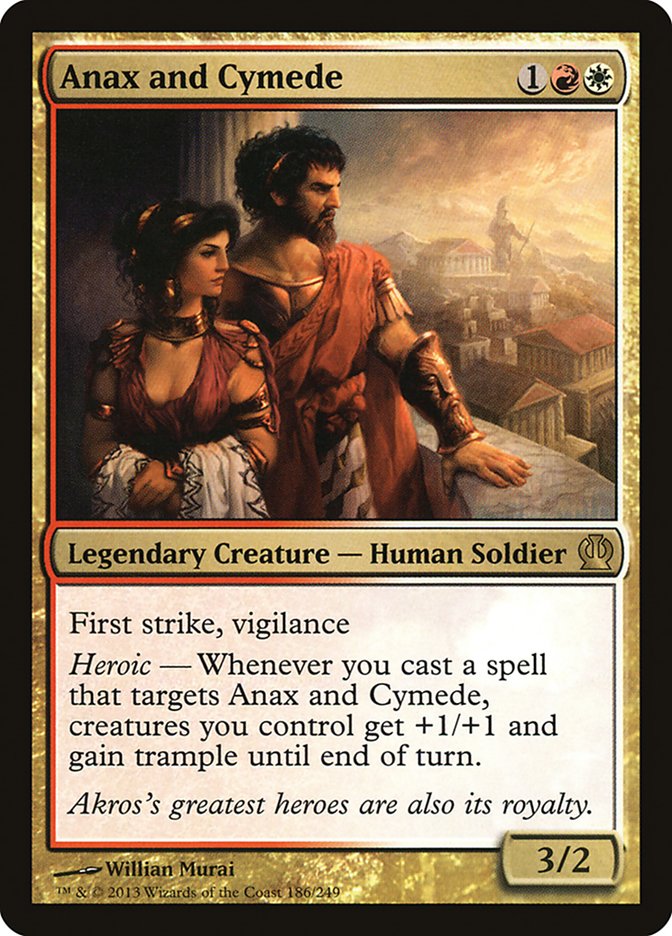 The first strike ability fits perfectly into the mold of aggro Boros-style decks. Anax and Cymede is a combat trick beauty. They fit perfectly in creature-heavy decks. 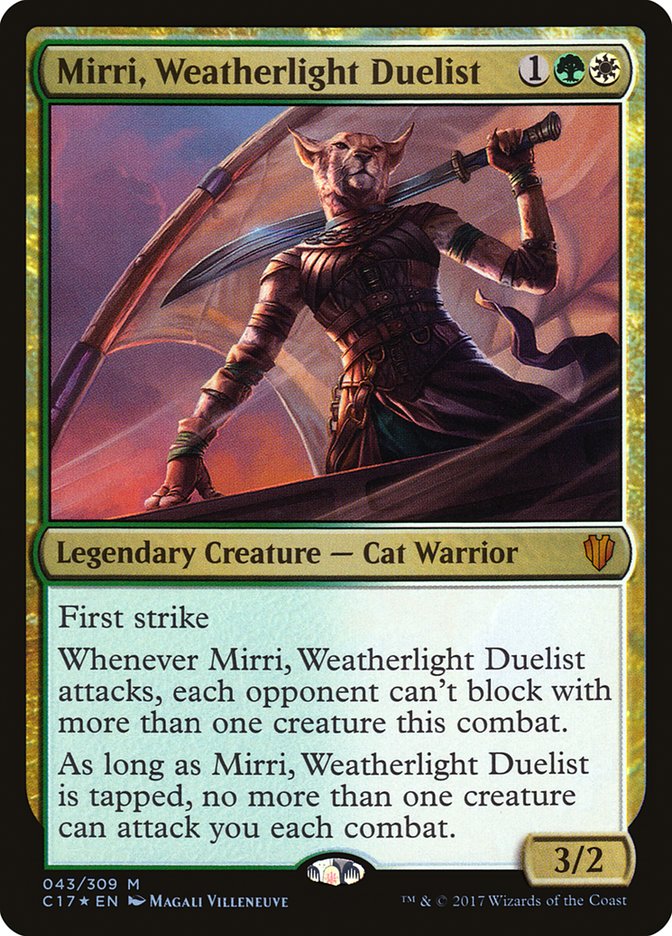 Mirri, Weatherlight Duelist is a marvelous way to limit your opponent’s blocking and attacking capabilities, mostly seeing play in Commander. 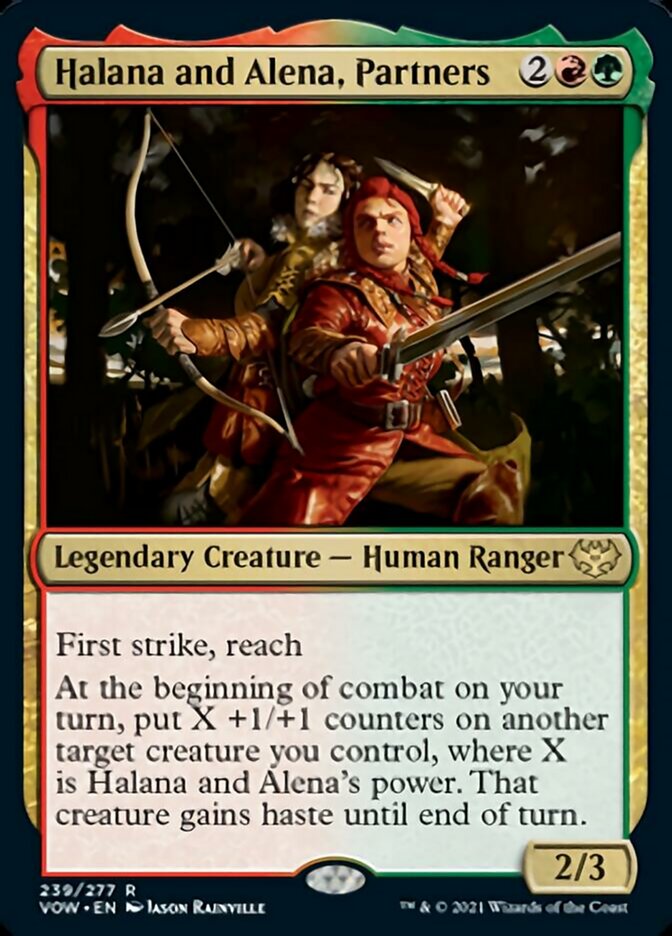 Halana and Alena, Partners is another Standard darling on this list. It can fit into many of the popular Standard builds now from Naya () Enchantments to Gruul () Modify. This is a card that must be taken care of quickly, otherwise it’ll spiral out of control. 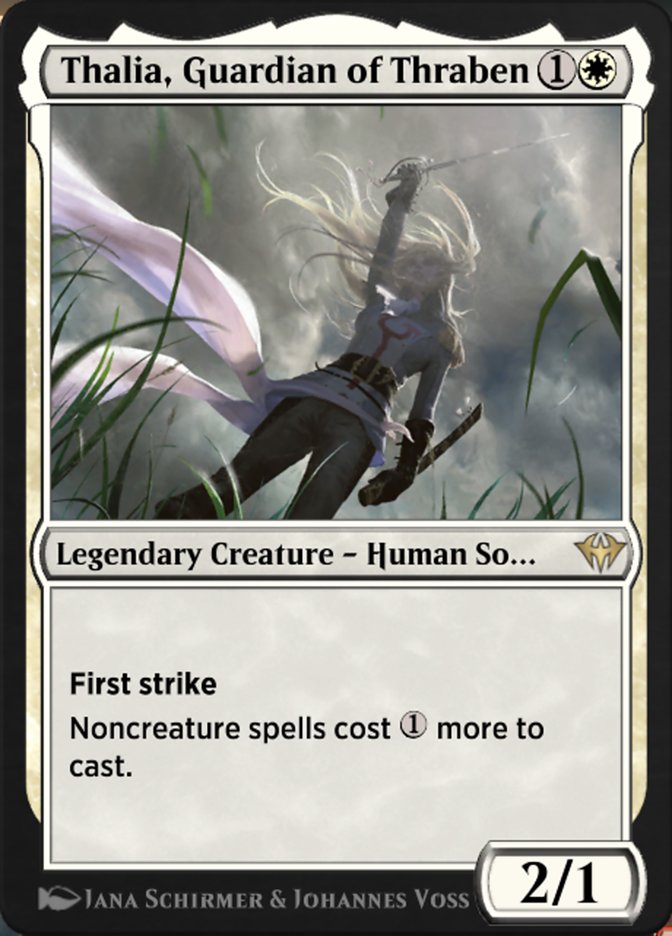 Here’s a Commander deck centered around the first strike keyword. Load the battlefield with many powerful first strike creatures and then bring in your commander, Kwende, Pride of Femeref, to take them to the next level by turning their first strike into double strike.

This deck works by providing a strong combat presence early and then a crushing combat pressure once the commander enters the battlefield. The deck is susceptible to board wipes and heavy removal decks, but it also brings some of its own removal to free the way for attacking creatures. It’s a fun Commander build that can be customized with different white creatures and spells to make it your own.

First strike is an evergreen keyword that we see in every set we have, and rightly so. It’s a great keyword because it adds a dynamic to combat that spices up the game, whether that’s in Limited or Constructed decks.

As always, thanks a lot for reading. If you have any further questions about the first strike, feel free to leave a comment below or talk to us on Twitter.

Stay safe out there, and remember to strike first!