Magic players got a taste of the Warhammer 40k universe in 2022 when WotC released an entire set of 40k-inspired Commander precons. The Tyranid Swarm precon introduced the ferocious tyranid army to Magic, along with the swarm’s new “ravenous” mechanic.

I’m your resident L1 judge, here to walk you through the ins and outs of ravenous. Let’s get to it!

How Does Ravenous Work?

Ravenous is an ability that appears on creatures with X in their mana cost. You can pay any amount of mana for X, and that creature enters the battlefield with X +1/+1 counters on it. The ravenous ability triggers when it enters and checks to see how much mana was paid for X. If that number is five or greater, you draw a card.

Since the card draw is the only part of ravenous linked to an ETB effect, cards like Panharmonicon will double your card draw, but will not double your +1/+1 counters.

The History of Ravenous in MTG

Ravenous was introduced to Magic in 2022’s Warhammer 40k Universes Beyond collection of Commander decks, which brought new creature types and mechanics to Magic.

Ravenous is currently exclusive to this set and only appears in the Tyranid Swarm precon. There are 11 cards in total with the ravenous ability, spread across the Temur () colors.

Is Ravenous an Activated Ability?

What Is Ravenous X?

Ravenous doesn’t have a number attached to it so you won’t see text like “ravenous 2” or “ravenous X” on cards. Ravenous references the X in a card’s mana cost, but the ability itself doesn’t have an assigned number.

When Do Ravenous Creatures Get Their Counters?

+1/+1 counters are put on ravenous creatures as they enter the battlefield. Once the creature hits the board it already has counters on it, and there’s no window to use removal on it before it gets the counters.

What if Another Permanent Enters as a Copy of a Ravenous Creature?

Permanents entering as copies of ravenous creatures won’t normally have a meaningful effect. Nothing special happens if you use a Clone effect that comes into play as a ravenous creature. Since the clone spell didn’t have ravenous, the creature doesn’t enter with any extra +1/+1 counters, and you won’t draw a card since X is treated as 0.

If you copy a ravenous creature while it’s still on the stack, the copy has the same X value and enters the battlefield with the same number of counters as the original. If that value is five or greater, both the copy and the original draw cards when ravenous triggers.

Copying ravenous spells was the reason Magus Lucea Kane was included as the alternate commander for the Tyranid Swarm precon.

What if a Ravenous Creature is Copied?

Copying a ravenous creature works similarly to cloning it. The copy enters the battlefield, but since it wasn’t cast there’s no X value for ravenous to reference, so it doesn’t enter with any extra counters even if the creature it’s copying has counters on it. You also don’t draw a card since X is treated as 0 for the copy.

Does Apocalypse Hydra Have Ravenous? 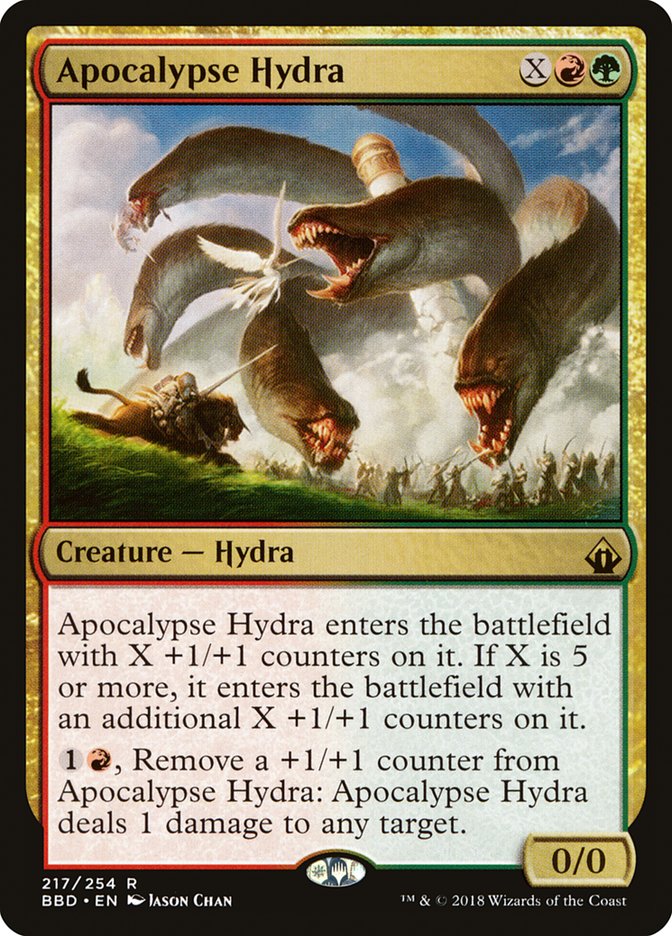 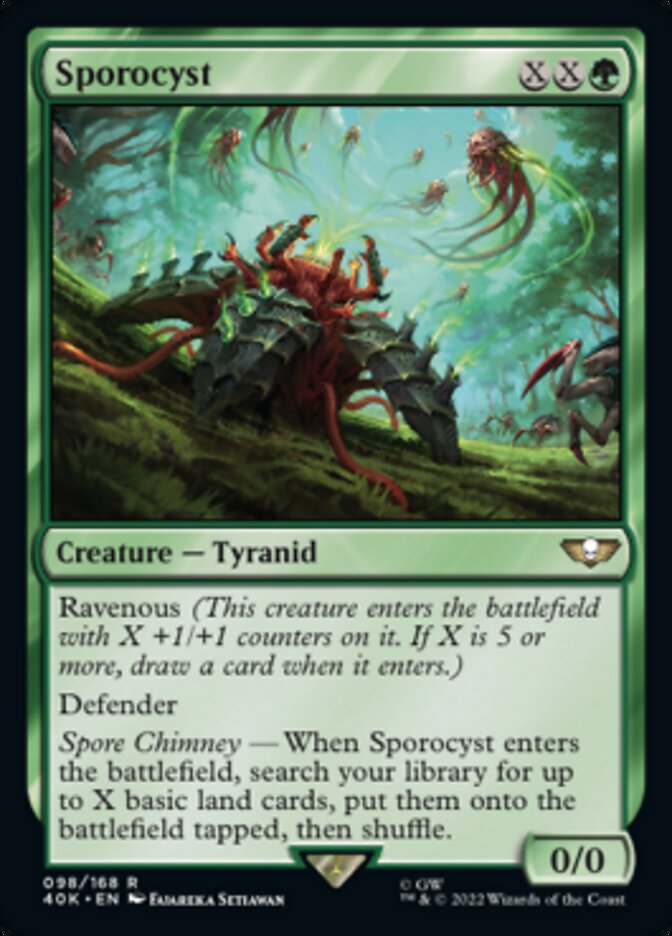 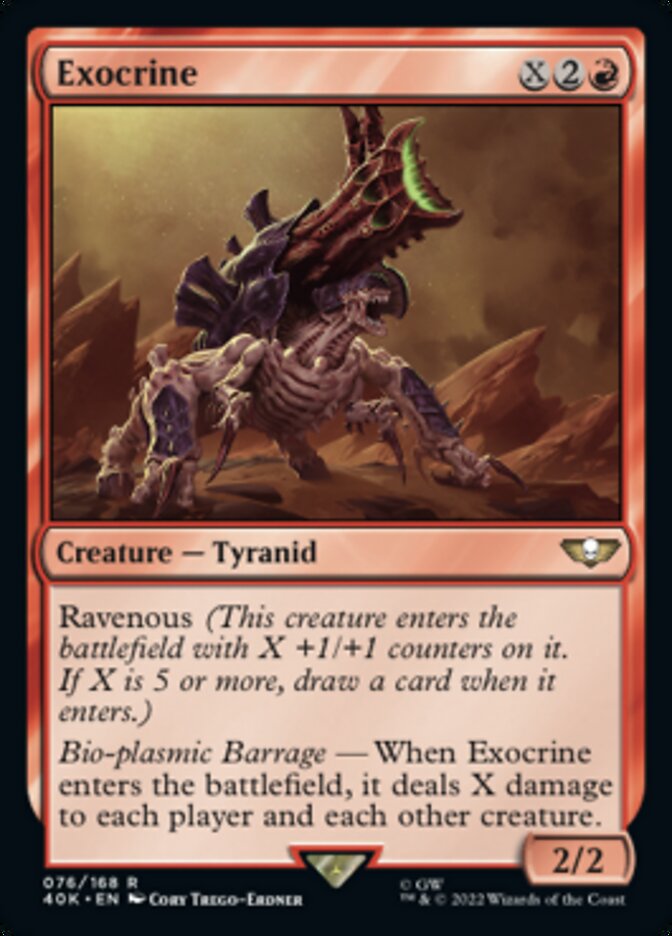 Sporocyst and Exocrine stand out as the frontline of ravenous creatures. Sporocyst has the floor of a Farhaven Elf with defender, but it lets you sink more mana into it for more basic lands. Exocrine mimics Earthquake and converts your mana into damage. It’s often the last creature standing and usually puts everyone’s life totals in the red zone (including you!) 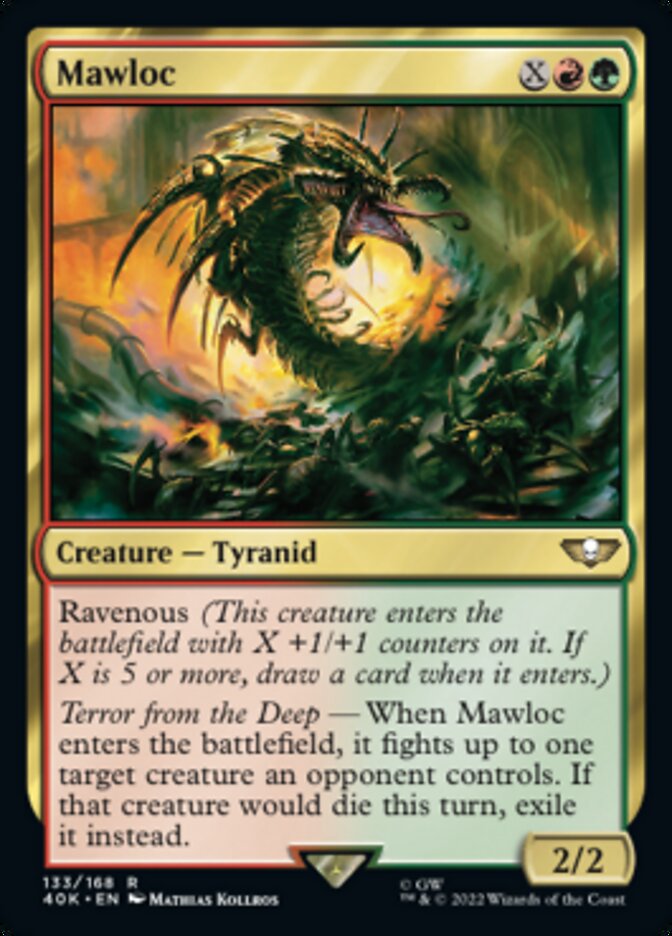 Mawloc has also been impressive. It often draws a card from the ravenous ability while exiling an opposing creature, representing a clean three-for-one and leaving a large body on board. 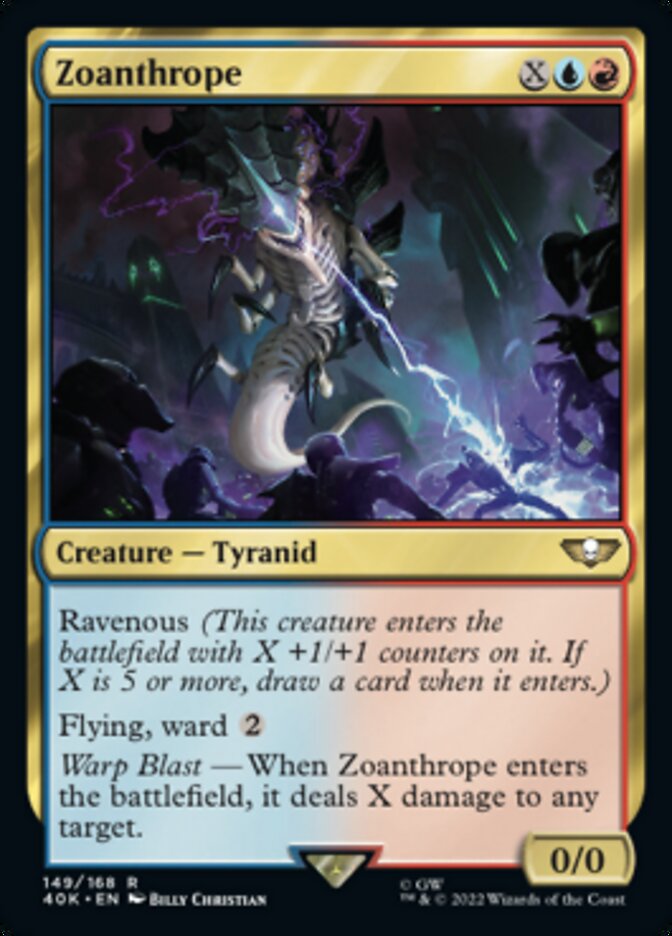 Zoanthrope deserves a mention as well since it’s a filter for infinite mana that can remove a player from the game. 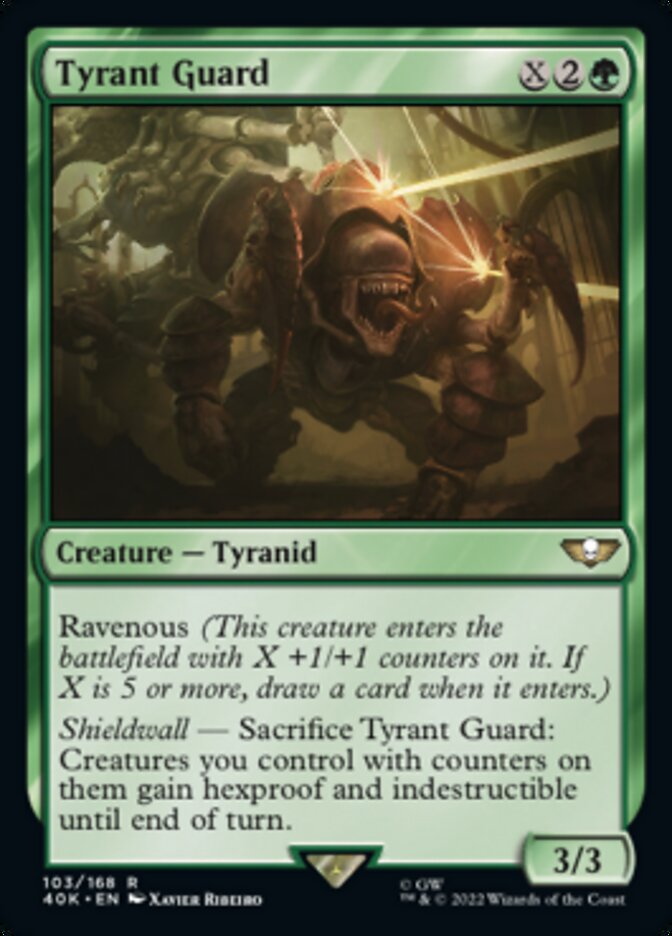 The last standout card is Tyrant Guard, which sits around and acts like a Heroic Intervention for creatures you control with counters on them. It plays into all your usual counter synergies while protecting your other pieces.

This deck capitalizes on ravenous creatures by combining them with other X spells and ramp effects. Magus Lucea Kane takes the place of The Swarmlord from the precon since this deck is more focused on mana production than on +1/+1 counter synergies.

Ravenous is a solid addition to Magic. “X spells” is a real archetype at this point, with commanders like Rosheen Meanderer and Zaxara, the Exemplary spearheading their own versions of the deck. The Warhammer 40k ravenous creatures are excellent additions to these decks while being generically powerful tools for any deck that can make tons of mana.

I expect ravenous will make a return at some point, maybe tied to new hydra creatures since the counter-granting ability is so close to how a lot of hydras in Magic work. Have you found a home for the ravenous tyranids in your Commander decks? I’d love to hear about it in the comments below or over in the Draftsim Discord.