Greetings planeswalkers! If you were to show the average Magic player Chaos Orb or Falling Star, their reaction would probably be as though you cast Befuddle on them.

This is because “dexterity cards” are objectively weird. So weird, in fact, that they’ve been banned in every format! Vintage lets you play Ancestral Recall, Black Lotus, and Time Walk, but not Falling Star or Clay Pigeon. What does this say about dexterity cards overall?

What Are Dexterity Cards in MTG?

A “dexterity card” is an unofficial title for a class of cards that require you to perform physical tasks to resolve them. Dexterity cards can task you with doing all sorts of things, like: 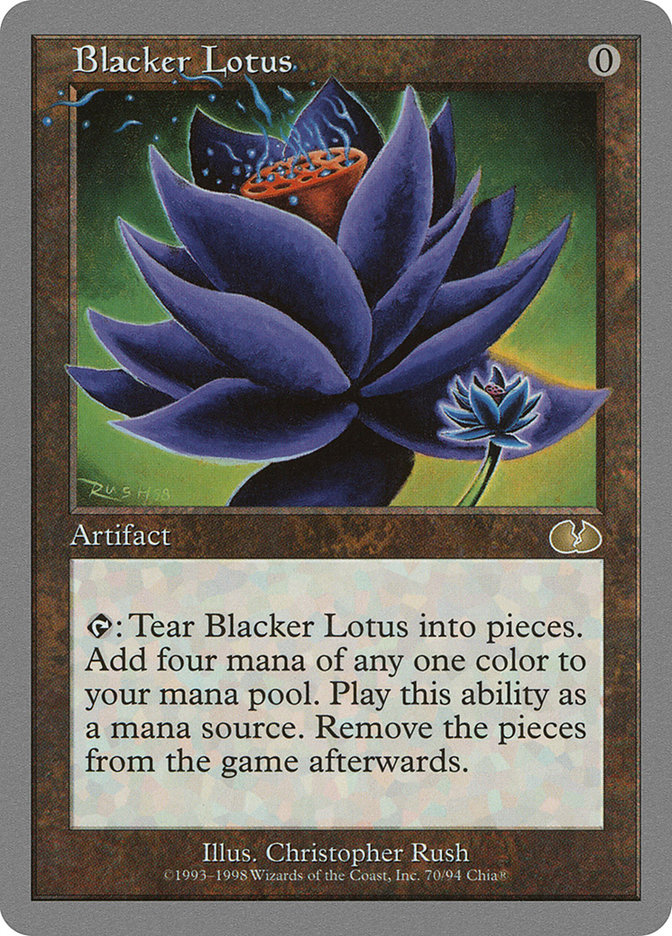 Blacker Lotus comes from a subclass of dexterity cards, a duo I’ll be calling “rippers”. The rippers were an exceedingly unpopular class of cards that will likely never see print again. They were given a 10 on the “Gotcha scale” (an Un-set version of the Storm scale), which is the highest detriment that can be given to a casual mechanic. It turns out players really don’t like being required to destroy their cards to use them.

If you’re being scrutinous, you could fault me for including Blacker Lotus on this list at all. It actually lacks any sort of direct “dexterity” element. Still, it made the list just by virtue of being a ripper.

Anyways, Blacker Lotus itself is a riff on, well, Black Lotus. It’s even more overpowered than its predecessor but is permanently sacrificed upon use. Given that just one Blacker Lotus would set you back $27, it’s no wonder that most players wouldn’t want to rip one up! 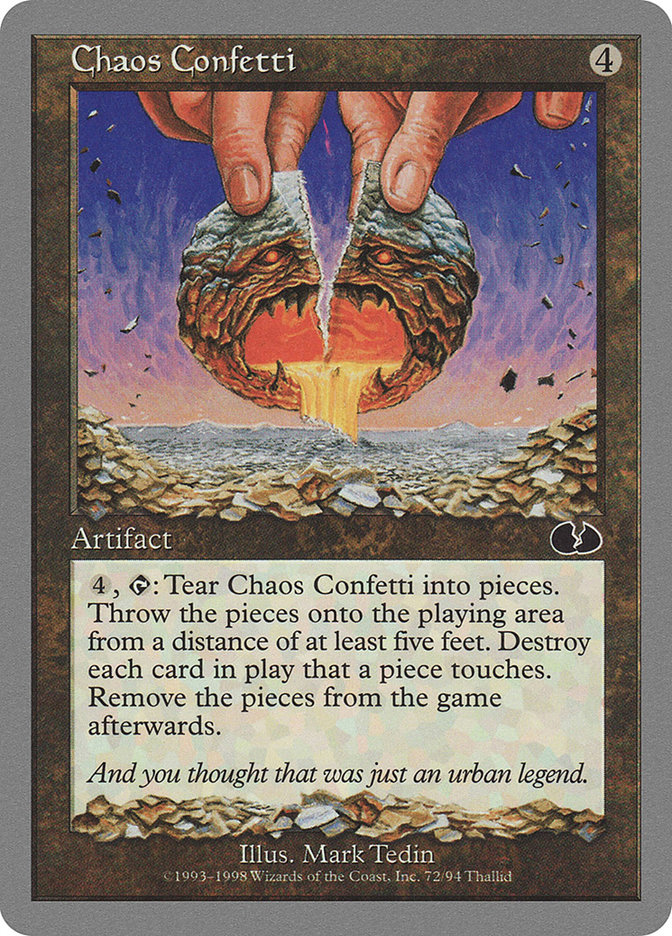 Chaos Confetti is an Un-set riff on Chaos Orb. It also improves on the power level of its predecessor by requiring you to destroy it entirely. The more pieces you can rip Chaos Confetti into, the more cards you get to destroy.

While both designs are objectively abhorrent, Chaos Confetti is somehow even more egregious. It may as well be an improved Ajani Vengeant ultimate if you can pull this off! But you might also just end up destroying your own board too because very few players have actually practiced throwing ripped Magic cards.

I imagine this would shine the brightest in Rule 0 Commander where you can throw to your side instead of in front of you (lower risk of blowing up your stuff). 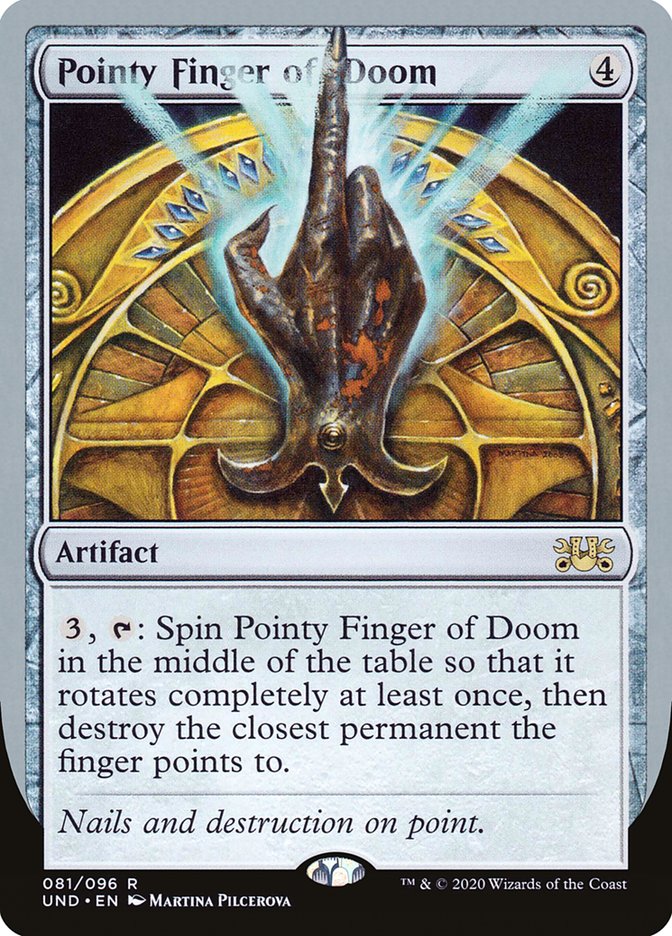 Pointy Finger of Doom is an incredibly clunky and unreliable gimmick card that randomly destroys creatures. While it doesn’t say “creatures” on the card itself, most Magic players lay out their board states similar to how Arena does:

So you can expect that the “closest permanent” will almost always be a creature if you place Pointy Finger of Doom in the middle of the table. If there are no creatures, it randomly destroys lands.

Overall it may be one of the weakest cards on this entire list. You have to pay a truck load of mana (7, 10, 13, 16, etc.) to have this even do anything, and the effect itself is of course completely unreliable. 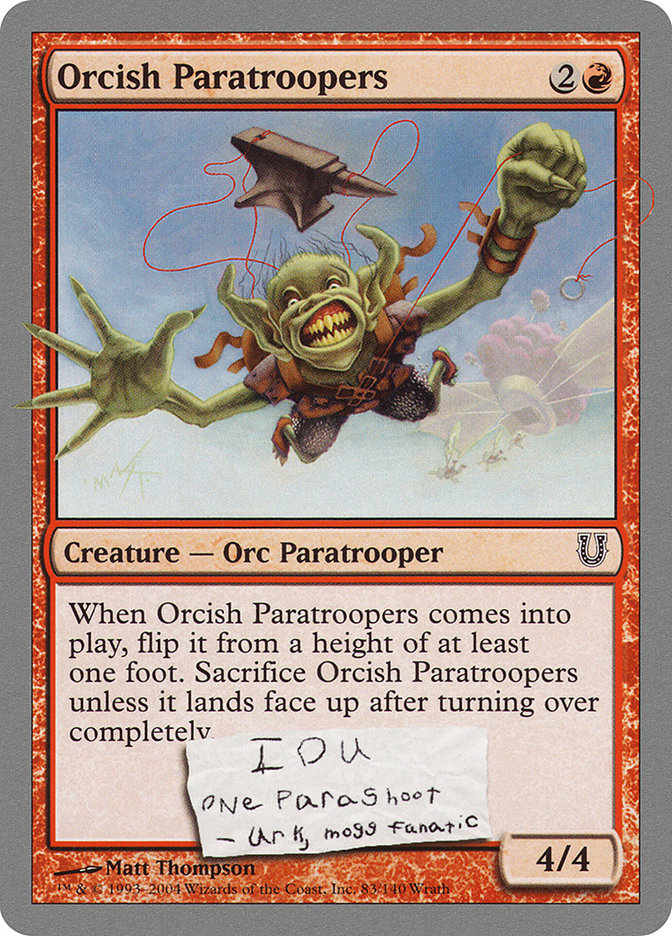 Orcish Paratroopers is a well-sized vanilla creature with a 50/50 chance to sacrifice itself immediately on entry. This chance is tied to a flipping subgame you have to play as you cast it.

The main issue with Paratroopers is its unimpressive risk-reward ratio. The reward isn’t that good (especially by today’s standards for creatures), and the risk is the entire card itself.

I’m pretty underwhelmed by this one since success isn’t that fun, and failure isn’t fun either. 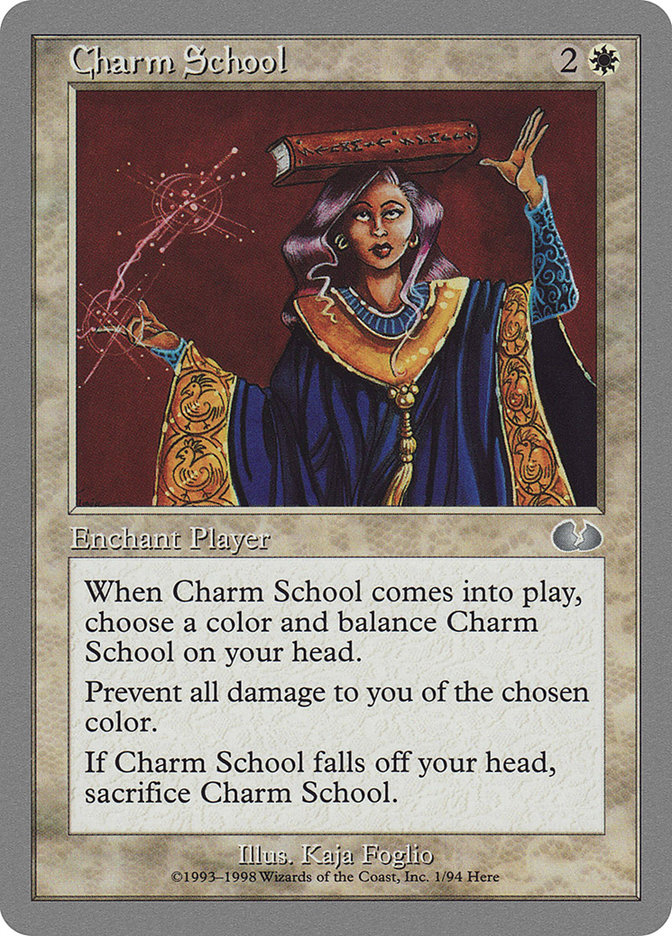 Charm School is a strange stax piece of sorts that uses a head balancing mechanic we’ll see on a few other cards later. It’s capable of locking your opponent out of damaging you as long as you can manage to not fail the gimmick. I enjoy the head balancing mechanic but I’m not a fan of this card itself since success with it may prevent the game from advancing entirely.

For this card and all cards like it, you could engage in a bit of “metagaming” by watching this video. You won’t be belly dancing (probably?), but there’s still some good info in the video for finding your balance. And trust me on this, because I’m balancing my credit card on my head as I type this! 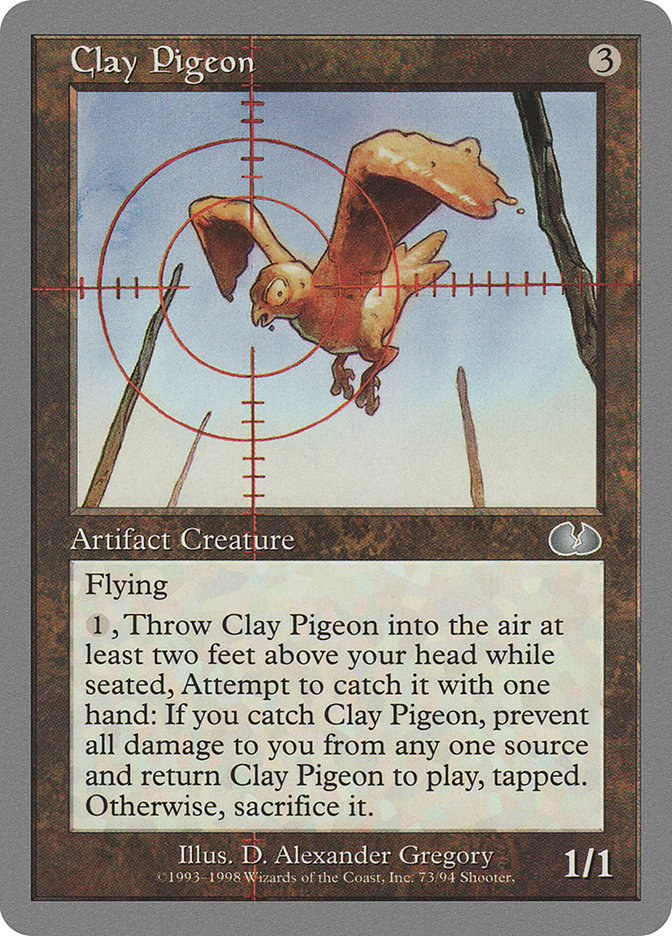 Clay Pigeon isn’t good, but I like it a bit more than Charm School. It’s similar in function (dexterity gimmick to prevent damage) but having to use the gimmick every time you want to stop damage keeps the game from locking up.

The dexterity game that Clay Pigeon uses is probably a bit too unforgiving. As far as other uses go, well, it’s basically Skyscanner without the free card (atrociously bad).

Ticking Mime Bomb is the only social card featured on this list. Social cards are another class of meme-y Un-set cards that require you to rope outside players into your game of Magic. Their effects have to be resolved by a third party who isn’t playing the game you’re in.

This is a fun card with a great pun but also not very good on rate (compare to Volley Veteran). At an LGS full of loud laughing nerds playing Unfinity, I fail to imagine this one is easy to pull off because it strictly forbids speaking.

Your mileage with pantomiming may vary! 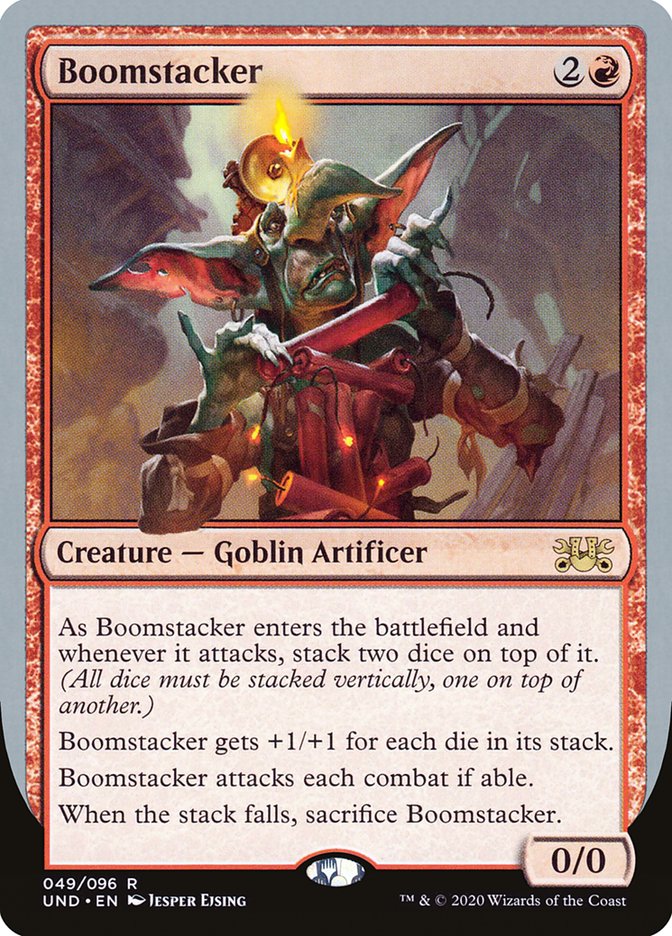 Boomstacker is kind of like a better designed Orcish Paratroopers. It has a similar gameplay loop (big vanilla with a risk) but gains tension over time. Its size scales with the number of dice you have to place on it, which gives the card a self-contained Jenga feel.

It’s obviously not good in any real sense, but the dice stacking subgame is pretty fun. 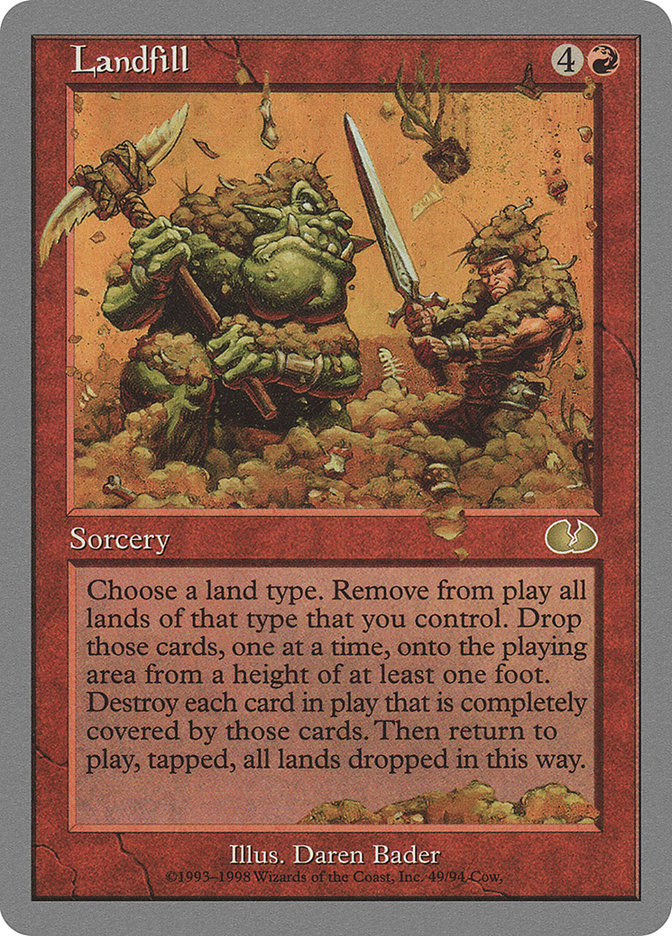 Landfill is a flavorful card that scales greatly with the number of lands you have in play. Those lands have to be the same land type (basic type, Gate, etc.), which means you should likely either be mono-red or something like Prismatic Omen.

It should take about three or four cards per permanent to cover them, which makes the output of this card pretty poor with just five lands in play. 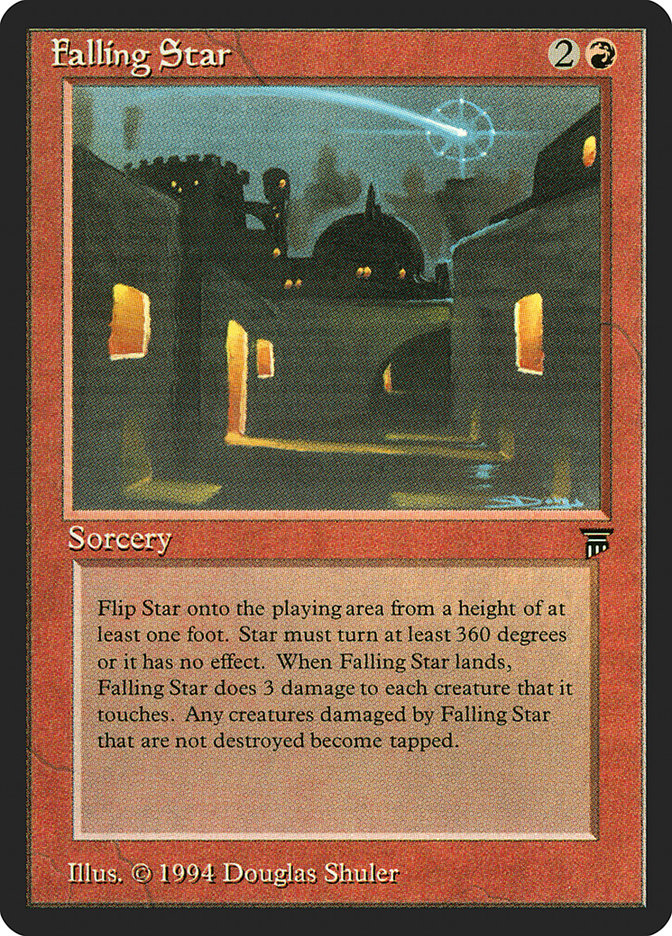 Falling Star is functionally similar to Chaos Orb except it only affects creatures and hits them for just three damage. It doesn’t hit lands, which is both good (I hate land destruction in general) and bad (the card is much weaker).

Having creatures that survive it get tapped is quite flavorful but also random since it’s a very non-red thing to do. This was the last dexterity card to ever be printed outside of Un-sets and holiday products. 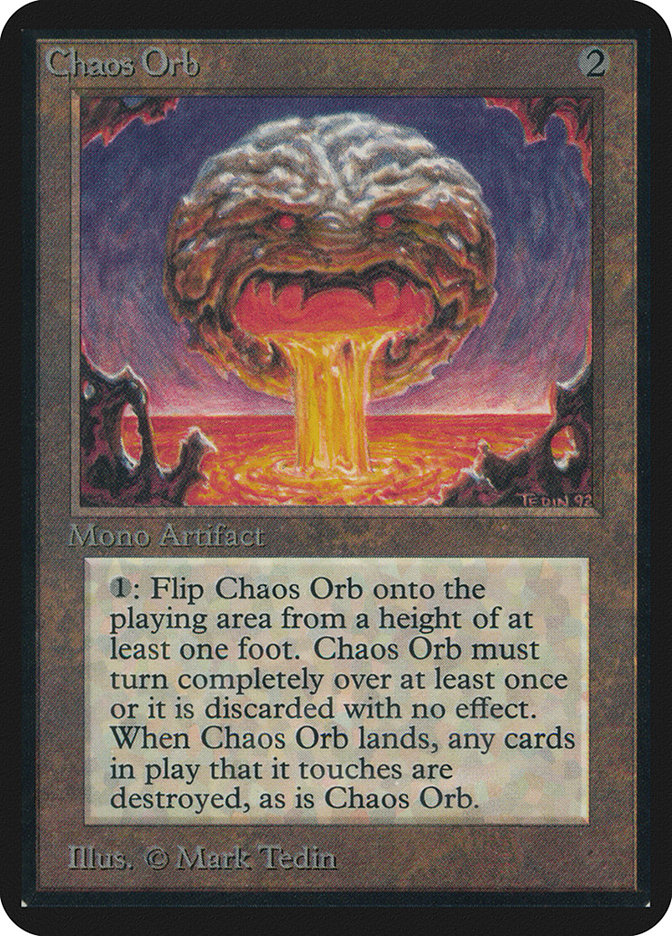 Chaos Orb is a legendary meme card and was the first dexterity card ever printed. The main issue with Chaos Orb’s design is that it’s really, really good.More or less a super Stone Rain of sorts if you’re good at the subgame.

It’s flavorful, but you’ll go for the throat every single time once you figure out how to use it (hint: blow up their lands). Players didn’t really get this back in 1994, but this card would utterly break the game in half if it were printed today! 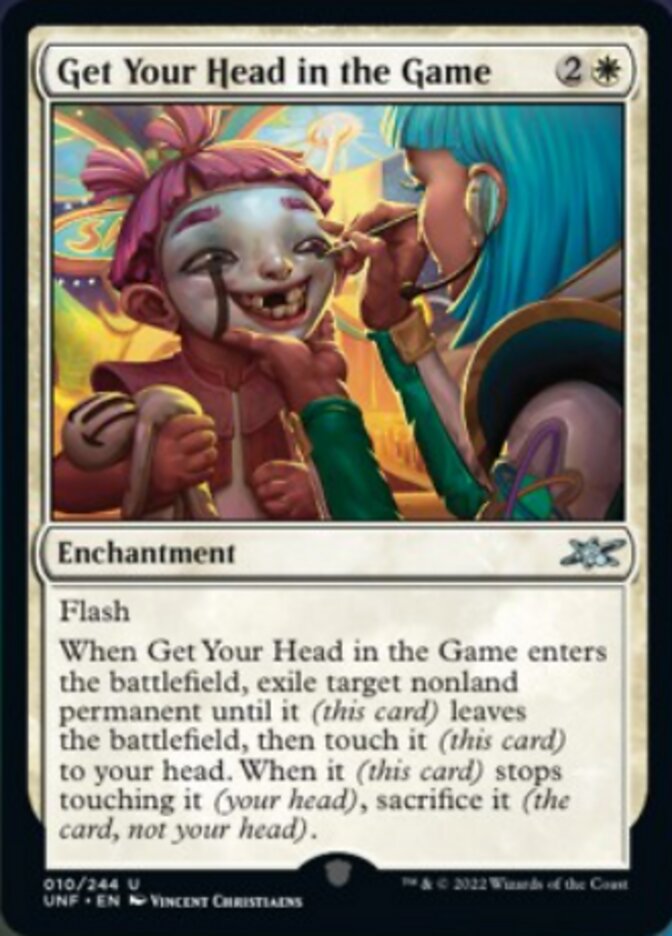 Tying Oblivion Ring to your head is a neat idea, and this card’s text got a chuckle out of me with its last sacrifice line. This is really efficient removal as long as you don’t drop the card itself, so think of it like a Heliod’s Punishment of sorts (you will eventually drop it, trust me).

One thing I like about the head balancing mechanic in Unfinity is that there’s a silly tension between “hats matter,” Orzhov ()’s draft archetype, and head balancing since most hats make balancing cards harder.

Dart Throw isn’t actually a card in the strictest sense since it’s an attraction and only goes in your attraction deck. It’s the only attraction that involves a dexterity challenge.

I enjoy this card because of its good but not broken payoff and fun gimmick. I’m not the biggest darts player myself, but it’s definitely an iconic theme park game.

Goblin Sleigh Ride is high on the list mostly because of “you slide them on their merry way,” which is one of the best lines I’ve ever seen on a Magic card.

As far as the card itself goes, it acts like a strange mass removal spell of sorts. Being tied to toughness is uncharacteristic of a red card so you probably have better results pairing this with something like Wall of Omens. 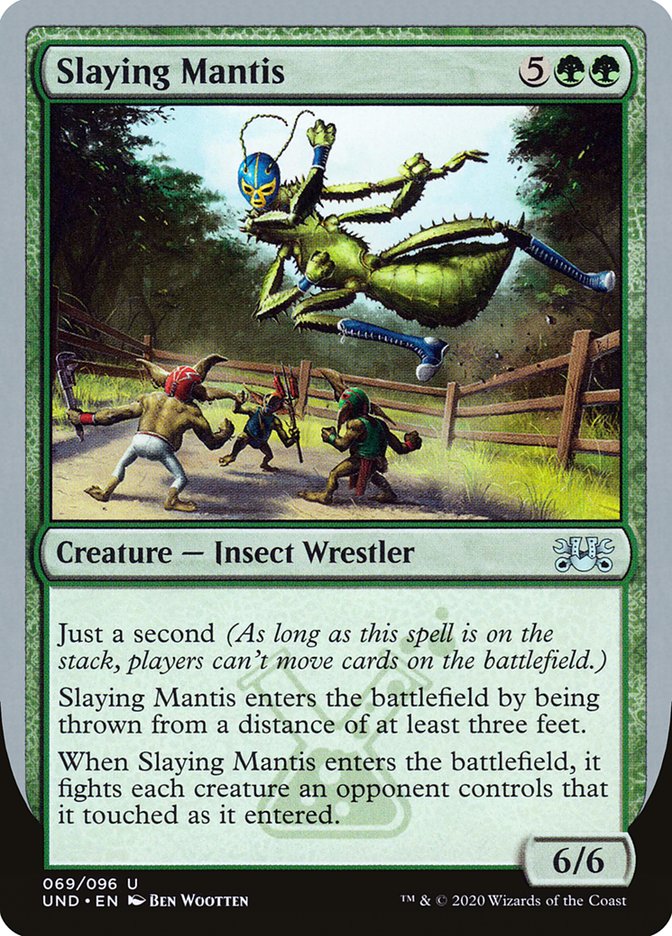 Slaying Mantis is my favorite Chaos Orb-style card because it’s fun, not horribly overcosted, flavorful, has great art, and has the “just a second” mechanic. This mechanic is vital because it hard-locks in the unspoken rule that your opponent can’t just move things out of the way of your Chaos Orb!

I also appreciate how the more creatures you touch with this, the less likely it is to survive the fight.

D00-DL, Caricaturist is a tad stressful but also really fun to play with and a cool twist on the usual Soulflayer template. You only have 15 seconds to draw a token creature with a variety of items, and that token creature ends up with keywords based on which items you include.

Fangs, footwear, and wings (for a 4/4 flying/lifelink/haste) are the most important things to draw, so focus on those first and do the others as a bonus. The rate here is genuinely impressive if you can play that off! 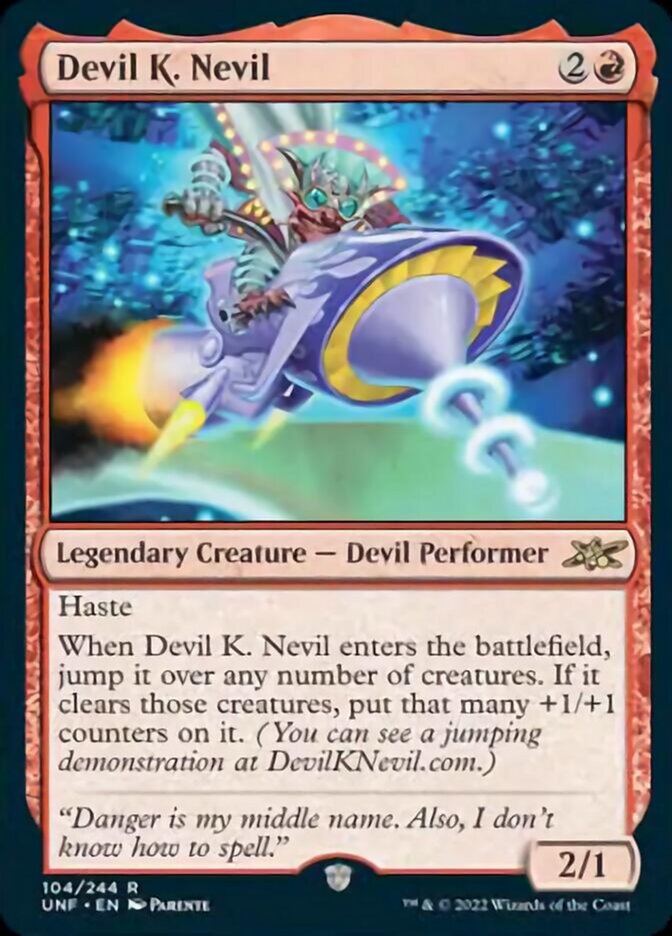 Devil K. Nevil is a meme card that was meme-y enough to get its own personal tutorial video. That video is referenced on the card itself and shows you a “jumping demonstration” of how the card works. Whether or not you find this card and video funny is probably a matter of personal taste since it’s a pretty straightforward Evel Knievel homage.

I also like how it encourages you to wait for bigger board states to pull off bigger jumps!

No, dexterity cards are not legal. You can’t play these cards in anything other than Un-set Drafts, kitchen table Magic, and Rule 0 EDH.

Are Dexterity Cards Good or Bad for Magic?

I fail to see any real harm dexterity cards do to the game in small, casual doses. Cards like Chaos Orb also show us just how far Magic has come today and how utterly bizarre the first set really was.

I’m glad they’re confined to Un-products in small doses because this is the kind of gimmick that gets old fast.

And with that we reach the end of our brief journey into the world of dexterity cards. If you play any Unfinity Drafts soon you’ll get to experience some of the goofy goodness I discussed here.

What do you think about dexterity cards? Have you ever played with them, or are you content to keep them as far away from your tables as possible? Let me know in the comments below or join the discussion over in the Draftsim Discord.

Until next time, may your Devil K. Nevil always clear the table! 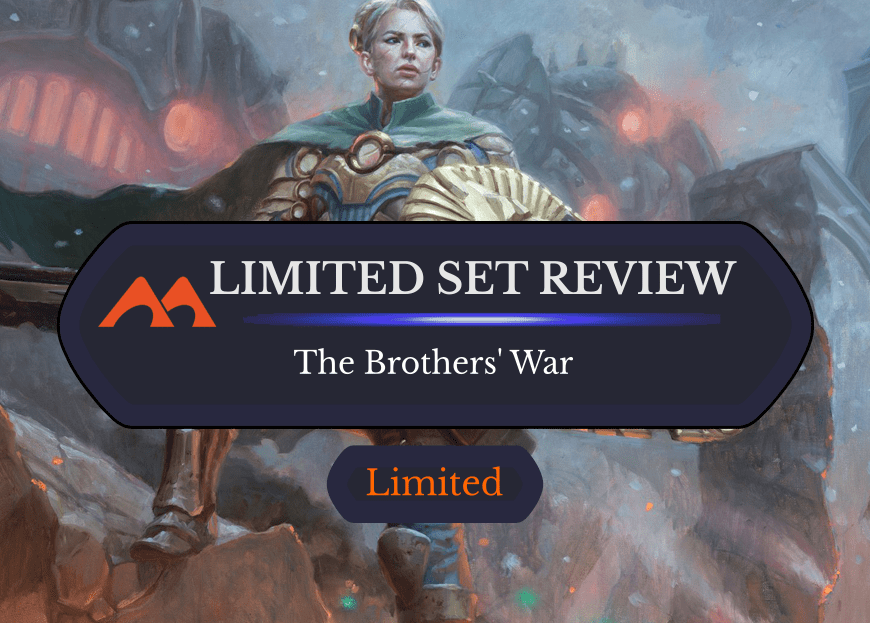