Jund () is synonymous with midrange decks that grind your opponent and have good planeswalkers or two-for-ones. There was a time when Jund was only one shard in the plane of Alara, one of the most savage and competitive parts of the plane.

This was the kind of place where creatures would devour each other. The aptly-named devour mechanic was developed as a result, and it’s literally the strong preying on the weak.

How does devour work, what does it brings to MTG, and which are its best cards? Hope you’re hungry!

How Does Devour Work?

The History of Devour in MTG

Devour was created in 2008 in the Shards of Alara block. There were 13 cards printed with the mechanic at the time, and it hasn’t returned in a main set ever since. It’s been used in things like Commander precons and Modern Horizons sets in a few designs.

There’s been a few variants, like “devour artifact X” in Modern Horizons 2, which applies the mechanic on both artifacts and artifact creatures (Caprichrome). The mechanic has also been used on Devouring Hellion in War of the Spark, but it applied to creatures and planeswalkers like a devour 2 just without keywording.

It’s important to note that cards like Sprouting Thrinax, which saw a fair bit of Standard play, were designed to work well with devour. You devour a card and get three sacrifice fodders, or trade your 3/3 and devour three creatures on the same turn.

Devour X means that when the creature with the ability enters the battlefield, you may sacrifice other creatures. For each creature you sacrifice you put X +1/+1 counters on the devour creature. Sometimes there’s a little math like on card Thromok the Insatiable, which has devour X:

The mechanic is exponential, meaning that if you devour one creature, you put a counter on the card. If you devour two creatures, you put two counters for each devoured creature, so four counters total. Devouring three creatures makes Thromok a 9/9, and so on. No wonder the card is base 0/0!

If the number is specified, like in devour 2, each devoured creature adds two +1/+1 counters, and so on. There’s even devour 3 on cards like Thunder-Thrash Elder.

Is Devour a Triggered Ability?

No, it’s not. Triggered abilities go to the stack and can be responded to. That’s not the case with the devour creatures, which is a static ability.

Can You Devour a Creature with Protection from a Color?

Sure you can. You sacrifice the devoured creature, so the devour ability doesn’t target it. You can sacrifice whatever creature you want unless there’s a card that says that you can’t sacrifice permanents (Angel of Jubilation comes to mind).

What About Creatures with Indestructible?

Same thing. You can devour them because MTG’s rules allow you to sacrifice indestructible creatures. They can’t be destroyed, but sacrifice is an entirely different effect.

Can You Choose Not to Devour any Creatures with the Devour Ability?

Sure! It’s totally optional. You lose some resources to have a big creature, but it’s entirely optional and sometimes inadvisable.

Can You Devour a Token Creature?

Yes, and you should most of the time. Devour doesn’t say nontoken creatures, so go for it!

What if a Creature Has Two Instances of Devour?

If a creature has two instances of devour then the player chooses one of those instances to apply. This is currently possible via a Planechase Anthology card called Jund, which can give creatures devour 5.

If you cast a creature with devour 1 and this ability gives devour 5, you get to choose one of them (probably the 5 since there’s almost no downside to it). It won’t combine both instances into a “devour 6.”

Thromok the Insatiable is a 0/0, but it has the potential to easily be a 9/9 or 16/16 depending on the number of creatures sacrificed to it. It’s a big beating stick! 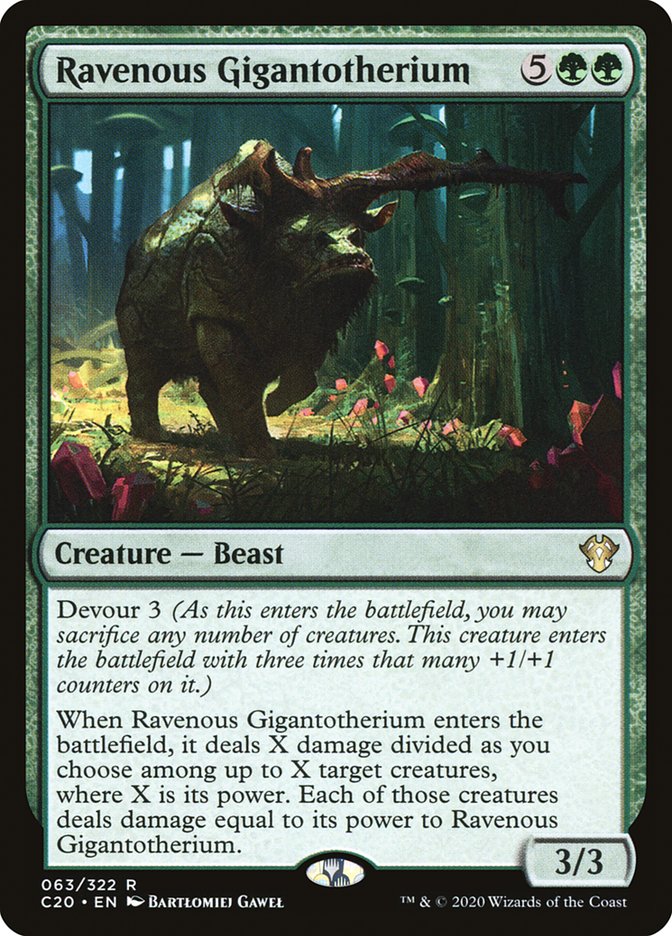 Ravenous Gigantotherium has the potential to be very big, even acting as a two-for-one or even a sweeper in a tokens deck. You’re paying seven mana, but it’s worth the effort.

It works even better in a beast tribal deck. 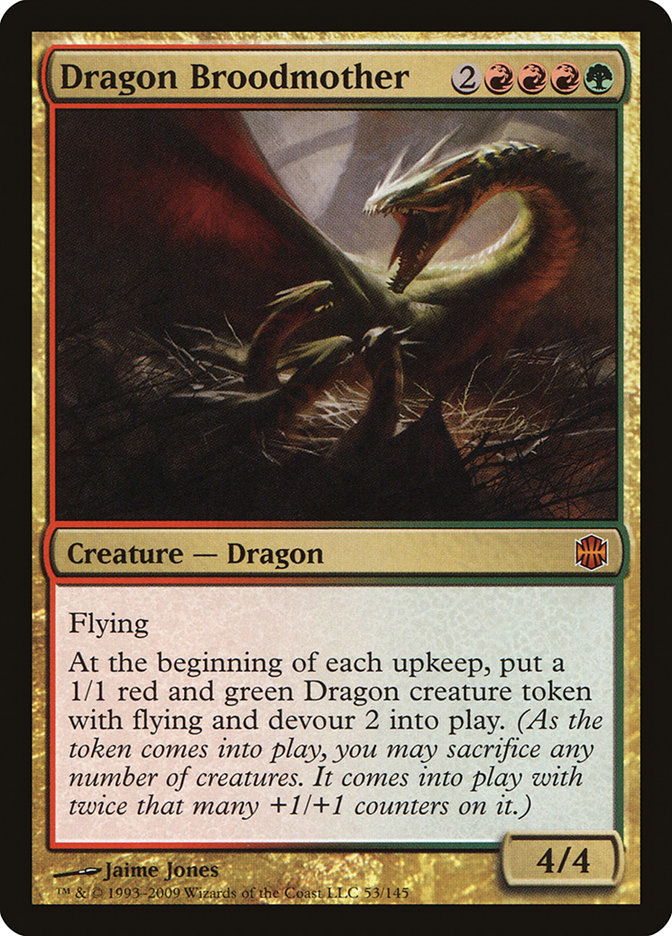 Dragon Broodmother technically doesn’t have devour, but it makes 1/1 tokens with devour so I think it’s fair game. Making tokens every upkeep is very good in EDH.

These tokes are dragons in dragon colors, and one token can even devour the other. Add a red card that cares about creatures dying and you have a little engine going.

Devour has inspired sacrifice-related mechanics, and it can be an interesting addition in the right decks. Some cards like Devouring Hellion were made without the keyworded mechanic.

Unfortunately the power level of the mechanic still seems to be at 2009 level, and you need to build around it very hard to be rewarded. It just happens to fit more casual EDH decks and limited/low-power Cubes. Big creatures still die to removal after all and you get heavy card disadvantage when that happens, which is often a warning flag for Constructed success.

What cards do you play with the devour mechanic in EDH? What interesting sacrifice engines do you use? Let me know in the comments below or in the Draftsim Discord.

Thanks for reading, and I’ll see you next time!