It’s been ages since the release of the first Modern Horizons, a set that targets the Modern and eternal formats. Remember the experience of drafting ninjas? That sneaky ninjutsu mechanic always gives your opponent chills. Or how can we forget Sam Black’s ridiculous Stream Control deck?

And what about Hogaak, Arisen Necropolis, the card that terrorized Modern (and even Legacy)? The set design that gave birth to this monstrosity is now coming back.

Modern Horizons 2 will be here soon!

Let’s take a look at some of the dates to remember for Modern Horizons 2:

So, this will be a supplemental set for Modern and eternal formats, with lots of new cards and some reprints that give us new themes and throwbacks to some of our favorite mechanics. Unlike the previous supplemental sets, Modern Horizons 2 will be the first non-Standard set with a pre-release kit that will contain 6 booster packs, a spindown die, and a stamped pre-release foil promo card! Pretty awesome right? But wait, there’s more! This set will also have the usual draft booster box and collector booster box.

I’m so pumped for the upcoming alternate arts and to maybe get a card like Wrenn and Six, which drastically boosted the game for RGx decks.

If your LGS is still unable to operate in a face-to-face manner, they can host using the SpellTable Beta for webcam pre-releases. It’s a tool developed for running remote play events and it’s the simplest way for us to run a tournament or any casual paper Magic play within the safety of our homes.

Oh, just another bomb to drop for you:

You read that right! The enemy fetches are coming back. Rejoice! You what that means, right? The prices might go lower, so might as well save up now for the surge in supply of these eternal format staples.

In all, a total of 42 new to Modern cards will be reprinted.

So, the price of booster packs for Modern Horizons 2 will probably be the same as the original, at around $15. Don’t believe me? Take a look:

A pretty good deal, I must say. I’m planning to buy a draft box to get those powerful fetch lands for my collection, for sure.

Reprising the popular “Retro Frame” — aka How Magic Should Be — from Time Spiral Remastered, we’ll be seeing some cards with the original border. The first ones revealed were the enemy fetches:

Will MH2 Be on MTG Arena?

Unfortunately, no. You’ll have to head over to Magic Online or your LGS for this one. The set is way too complicated, there are way too many mechanics (that would probably break MTGA), and the set is designed for Modern — which is not available on Arena.

We only know a few spoilers so far, but don’t worry, we’ll keep this updated as more details come out!

Sanctum Prelate will be the Buy a Box Promo for Modern Horizons 2.

Interestingly, Abundant Harvest was pre-spoiled as a Mystical Archive in Strixhaven. We’re yet to see what rarity that card will be in this set.

We’ve now had a few cards and art revealed online that fall squarely into the “we’re pretty sure this or something very similar will be in the set.” Click the button to reveal these leaks and speculative card guesses.

Someone on Reddit (who has a history of other correct “predictions”), revealed that the following cards would be in MH2:

Some new cards include:

A Planeswalker that counts as a 1/1 insect in every other zone (aka you can Green Sun's Zenith it into play).

A cycle of Shriekmaw style Evoke Elementals where you exile a card from your hand to Evoke them.

Asmoranomardicadaistinaculdacar is getting a card. She has no mana cost and has to be Madness'd into play.

And here's some bonus packaging for you — that sure looks like a legendary squirrel, doesn't it?

Dakkon Blackblade, is that you?

As is customary for a new set, Magic designer Mark Rosewater has dropped a list of hints about what we’ll see in the new set. Here’s what he has to say:

First up, here are some things you can expect:

• a Frog twenty-six years in the making

• A card with the number words “four” and “fourteen”.

• a white enchantment with a trigger that investigates

Here are some snippets from rules text that appear in the set:

• “Whenever you cast your third spell each turn,”

• “for each other Ooze you control.”

• “If an ability of a <CENSORED> or another <CENSORED> you control triggers, that ability triggers an additional time.”

• “This ability costs 1 less to activate for each +1/+1 counter on creatures you control.”

• “you may sacrifice a Mountain rather than pay this spell’s mana cost.”

• “If an Insect card was milled this way,”

• “Protection from permanents with corruption counters on them”

• “instead create one of each.”

Here are some type lines from the set:

Finally, here are some of the mechanics in the set. (I replaced all the letters with x’s.)

Yes, you read that right. Rosewater listed 59 different “secret” set mechanics that will be in this set. And he only says “some” of the mechanics! What is this, Time Spiral?

What do you think about the other hints he dropped? Can you guess which cards he’s referring to?

A very exciting addition to MH2 is that it’s the first non-Standard set to feature prerelease packs! So you’ll be able to snag a very cool and unique package to help you experience the new set at home, over webcam, or in your store (if lucky enough!).

Draft boosters have the typical 15 card composition with one rare/mythic, three uncommons, ten commons, one land, and a token. Draft boosters are perfect for getting a bunch of new cards or doing a draft with your friends!

Right now these are under $300 each on TCGPlayer. And possibly even better on Amazon: 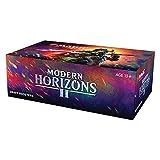 You can get a small sampler of draft boosters “as a treat” for a much lower price on Amazon: 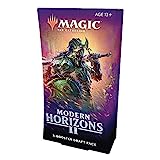 Set booster boxes are all about the experience of opening a pack of cards and discovering what’s inside. They’re just just plain fun to crack. They usually have:

These are selling for just under 300 bucks on TCGPlayer right now.

However, they may be even cheaper on Amazon: 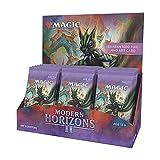 Collector boosters are perfect if you love premium, high-end versions of cards. Bling to the max. These typically include:

These are coming in approximately at $350 now on TCGPlayer.

About the same price on Amazon: 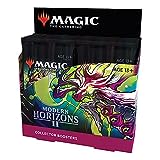 But if you want to get yourself a little gift, you can grab a little two-pack of collector boosters: 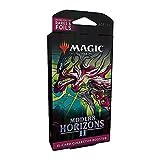 That’s right, prerelease packs include a free “participation promo” — that is, an additional, stamped, foil rare/mythic from the set!

Bundles are a great way to get an infusion of new cards and immerse yourself in a new set. Bundles typically come with: 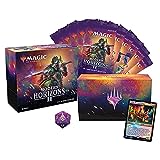 How about you? What do you expect will be reprinted or what kind of powerful cards do you want to see in the upcoming set? Are you pumped to see another set change the whole Modern metagame? Let me know in the comments!

As far as we know, this is all the info available right now. WotC did a good job at keeping MH2 under wraps for months. If you have any new details that we might have missed, please do let us know in the comments down there.

As always, if you want to improve your draft game and gain the advantage you need to increase your win rate in draft or sealed, check out our Arena Tutor. If you love our content and want to support us, consider heading over to our Patreon.

Renz is a casual MTG grinder with multiple Store Championships wins under his belt. He has been playing Magic since Kaladesh was released and loves to play Standard, Pioneer and Modern.

Which MTG Booster Pack Is the Best to Buy?