We’ve been having a blast with the Commander format for the past year now, but it’s not over yet! 2020 is the year that keeps on giving for us Commander fans, this time in the form of new cards and reprints galore across multiple sets for our favorite free-for-all brawl!

In particular, Commander Legends is going to be a breathtaking addition where you can draft a Commander deck. I see your eyebrow raised there, so let’s get to the discussion!

WotC has been on the top of their game with Commander products so far this year, including Commander 2020 and the soon-to-be-released Zendikar Rising products, so it’s only natural that they’re aiming to knock it out of the ballpark with Commander Legends. Naturally, this being a Commander set means that the cards will only be legal in eternal formats like Legacy, Vintage, and (obviously) Commander.

Oh, and before you ask, there are unfortunately no plans to put this set on MTG Arena at the moment.

Now that information has started to come out about the set, we know a few things. First, there’s going to be two new Commander decks released alongside the set that each have three unique cards that can’t be found within the set’s boosters.

Needless to say, when you promise a set with “legends” in the name, you have to come through. It certainly seems like Wizards did that. There will be:

Speaking of, this set boasts 20-card booster packs that each include 1 foil card and 2 legends out of the pool of over 70 new legends that are being printed. Oh yes, you heard right. Over 70. New. Legends.

If there’s ever a time to be alive as a Commander player, it’s now. Why are there booster packs for a Commander set, you ask? Well, that’s because you’re going to be drafting, of course!

One in every six packs contains The Prismatic Piper, which replaces a common. I’ll get to why in just a second. There will also be “more commons” to add more variety to the draft format.

As far as flavor, there isn’t really a distinct flavor identity for the set. It can be taken from any plane in Magic.

There will be four main mechanics in set. Three are returning and one is brand new for this set.

The exciting new mechanic for Commander Legends is… encore! Encore is a twist on the old mechanic “unearth,” allowing you to throw creatures out of your graveyard for one last vengeful gasp.

It’s an activated ability that exiles a creature card from your graveyard, creating a token copy of that creature with haste that’s sacrificed at the end of the turn.

The twist is that since this is Commander, you get to attack all your opponents. And you don’t get a choice about that! So no politicking. Sorry.

Cascade is a big gift for all us value-lovers out there.

When you cast a card with cascade (even if it gets countered!), you get to exile cards from the top of your library until you reveal a nonland card with a lesser converted mana cost. Then you get to play it. For free. So, you know, a free Black Lotus or two along with your free card.

Monarch is a strange mechanic, because it’s not always apparent what it means when you see a card with it.

In fact, the rules might be a little complicated to jam onto every card with monarch.

No one starts the game as monarch, and you can only acquire the “monarch” status when a card tells you that you do. Then:

Talk about having a target on your back!

Partner is an ability that some creatures have that allows you to have two commanders. As long as each eligible commander has partner, you can squirrel both away in your command zone.

The most notable feature of Commander Legends is what makes it the innovation product for 2020: this will be the very first set where you can draft Commander decks. If you’re wondering how that’s supposed to work, well, that’s a good question.

We’ll be following the same rules of Commander with a slight twist that melds it comfortably with the draft format. This means that every deck drafted will have a commander, and we can even play the good ol’ four-person free-for-all games that Commander is known and loved for.

Draft and gameplay for a Commander Legends draft should take about two hours overall.

The power level of the decks will be pretty high for draft. It’ll be below precon decks like Commander 2020 and Commander 2017, but only slightly so.

This is a big innovation that ties the entire draft format together. Since you always need to consider the color identity of your commander in draft, what if the guild for, say, a two-color commander you picked wasn’t open?

The answer is mono-colored partner commanders. That way, if you start with a white partner commander, you can begin taking white cards. When you see a commander of a different color, black for example, you can be rewarded for staying flexible and can start taking black cards as well. You end up with a white/black deck that has two commanders and enough playable cards to fill out your required 60.

All mono-colored legends in this set have partner. The Prismatic Piper is the only common in the bunch.

Want to practice drafting Commander Legends for free, right now? Head over to our draft simulator.

On November 5, 2020 the full spoilers were revealed. Here’s the entire card list for Commander Legends:

While these will be included in draft boosters (in the foil slot), they’ll be incredibly rare. You’re much more likely to find one in a collector booster.

All right, now let’s talk about reprints in this set. We know there’s likely going to be some pretty decent ones with this set. But that’s not what you’re here for, is it? No, you’re here because you desire fetch land reprints.

Wizards promised us fetch land reprints this year, and they have yet to deliver. They aren’t going to be in a Standard set, so the list of possible new homes for these coveted mana grabbers is dwindling.

WotC has acknowledged the growing desire for reprints for the benefit of Modern and, you guessed it, Commander players. Along with that, they’re well aware that it’s been quite some time since fetches have been printed in any capacity, the last time being as far back as 2017.

Unfortunately, you won’t be seeing these beauties in Commander Legends.

With the full spoiler out, we now know that they’re not in the set. Will we have to settle for the paltry and ultra-rare Zendikar Rising expeditions? It seems like the answer might be yes.

As is customary, Magic lead designer Mark Rosewater posted a teaser leading into spoiler season to get us hyped for the set release. Here’s what he revealed for Commander Legends:

First up, here are some things you can expect in Commander Legends:

• A card that temporarily steals a creature from a new place

• A card that references both beginning phase and postcombat main phase

Next, here is some rules text can you expect to see on cards in Commander Legends:

• “damage doesn’t cause you to lose life”

• “any number of Auras and Equipment you control”

• “where X is the number of attacking creatures with flying”

• “Whenever a token you control leaves the battlefield”

• “Commanders you control have”

• “chosen at random from among your opponents”

• “You and permanents you control have protection from Salamanders”

Finally, here are some creature type lines that will appear for the first time in Commander Legends:

I mean, how can you not be excited about a legendary rabbit wizard? Kwain, Itinerant Meddler is pretty cool. Faeries are an awesome creature type, too, and Nymris, Oona’s Trickster did not disappoint.

We’ve seen a lot of premium products and treatments coming from WotC recently. Their latest innovation(?) is the introduction of alternate-version treatments of the legends in Commander Legends called foil–etched cards.

These cards have a special frame, like “showcase cards” found in collector boosters, but go through a different foiling process.

You’ll be able to get these cards in both draft boosters (quite rare) and collector boosters (every pack).

We have reviewed these two decks in-depth right here. As a bonus, they’re available on Amazon and you can score both at once in a two-pack: 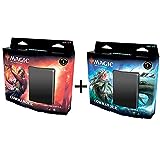 As is usual with Commander products, you’re probably gonna find this one being sold at your local game store. Always look to give them your support. If you don’t live near a store or the product isn’t in stock, check out some online sellers like Amazon, eBay, or TCGPlayer once Legends becomes available for order. 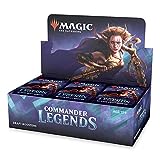 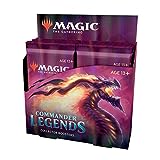 Individual sealed packs are pretty darn expensive right now, but I expect them to come down eventually:

Currently, though, you’re way better off buying a booster box than single packs.

The idea of drafting a Commander deck sounds extremely fun. I hope that there’s enough diversity in the card packs to allow for unique builds almost every single time, but I imagine with as many legends and reprints as there are, that shouldn’t be a problem. If this product is anywhere near as enjoyable as Commander 2020 was, Commander Legends will be, well, legendary!

What about you? Which of the new and reprinted cards were you most excited to see included? Feel free to discuss your thoughts in the comments below.

As always, if you’re looking for more stuff from us, check out our blog for tons of goodies for you to read. We also have a Patreon if you’d like to support the further creation of cool content.

For now, that’s all I’ve got. Stay safe and healthy, and we’ll see you back here soon!