From Snapcaster Mage to Underworld Breach to Lier, Disciple of the Drowned, Magic players have long tried ways to efficiently recur spells from the graveyard. But what if the spell never left your hand in the first place?

That’s where splice comes in. How does it work and how does it let you do things without the card ending up in the graveyard? And how might you leverage that in our decks? Let’s find out!

How Does Splice Work?

Through the Breach | Illustration by Randy Vargas

For example, Everdream is a card you can play for its 2-mana casting cost. Or you can pay the three for the splice cost when you cast another instant or sorcery to add the “draw a card” text to that other spell. So if you cast a Firebolt and splice Everdream onto it then you do two damage, draw a card, and retain Everdream in your hand to use or splice again later.

The History of Splice in MTG

Splice was a set mechanic for the original Kamigawa block, with 15 cards in 2004’s Champions of Kamigawa followed by 8 in Betrayers of Kamigawa and 4 in Saviors of Kamigawa, both in 2005. All of the splice cards in this block were “splice onto arcane” cards that required that the spell that was spliced onto have the arcane subtype. All of that became the poster child for a parasitic mechanic according to Mark Rosewater:

Two more splice cards with the text “splice onto instant or sorcery” were later printed in Modern Horizons. That adjustment made the mechanic no longer parasitic, but we haven’t seen any more since.

Can You Reduce the Splice Cost in MTG?

No. Splice is a text-changing effect, not a spell or a triggered or activated ability. So your Goblin Electromancer will reduce the cost of the spell you’re splicing onto, not the splice cost, which is an added cost to change the text. That also means cards that reduce the costs of activated or triggered abilities, like Zirda, The Dawnwaker, don’t apply.

Is Splice an Additional Cost?

Yes. Usually, that cost is a mana cost, but cards like Horobi’s Whisper and Torrent of Stone have other kinds of costs.

What if You Can’t Meet the Splice Requirements?

If you can’t pay the cost to splice you just don’t splice. You don’t alter the text of the card on the stack you tried to splice onto.

Because splicing is an additional cost you pay while casting the spell (like kicker), there’s no opportunity for an opponent to affect your ability to pay the splice cost because there’s no “in between” casting the spell and splicing onto it. So you couldn’t crack a Tormod’s Crypt to fizzle a Horobi’s Whisper.

Can You Splice the Same Card Multiple Times?

Not on the same target spell. But because splice leaves the card in your hand, you can then splice that same card onto another spell if you can meet all the costs.

How Does Splice Onto Arcane Work?

Splice onto arcane works like all splice effects, but it can only be spliced onto a spell with the arcane subtype.

Can You Splice Onto Arcane Multiple Times?

Not on the same target spell. But because splice leaves the card in your hand you can then splice that same card onto another spell if you can meet all the costs. But you can splice multiple different splice cards onto one arcane spell.

What’s the Point of Splice in MTG?

Card advantage. Because splice leaves the card in your hand you can generate an effect without spending a card.

Splice is good if the card advantage granted by the mechanic is able to be leveraged.

This isn’t exactly the case in most Constructed metas. Adding cost to a spell makes a counterspell that much more painful. Decks over the years that have used splice cards tend to focus on the strength of an individual card, like Through the Breach, which often don’t pack any arcane spells to splice it onto in the decks that used it or Show and Tell to get something broken like Emrakul, the Aeons Torn or Griselbrand out ahead of schedule.

These are a powerful source of card advantage in slower formats or with a controlling deck. Sam Black used Everdream and Splicer’s Skill to excellent effect in Modern Horizons Draft. In the original Kamigawa block Draft, being able to continually splice Dampen Thought onto arcane spells was pretty busted, as told by LSV. 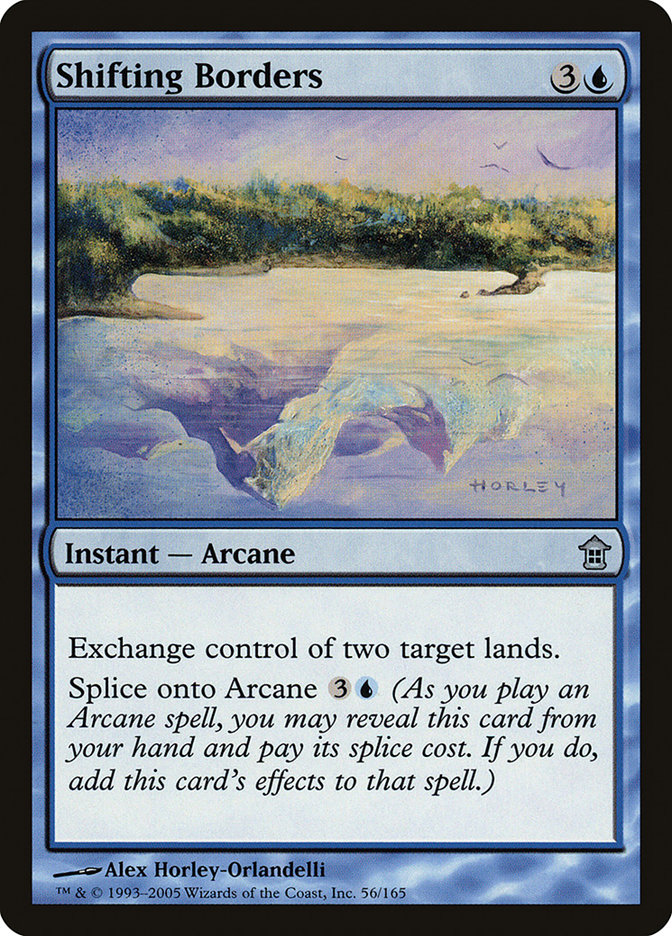 There is a pile of really underused splice cards that seem like they’d be played more if players knew about them. Shifting Borders is one, and it feels like a great meta-call against OP lands. And it really does interesting work if you’re running Zedruu the Greathearted or Orvar, the All-Form.

Desperate Ritual nets you mana even without the splice, which really matters in storm decks like Birgi, God of Storytelling. This card is hardly ever actually spliced in Commander since there are only 23 mono-red arcane spells, and a lot of them are unplayable lumps like Devouring Rage. 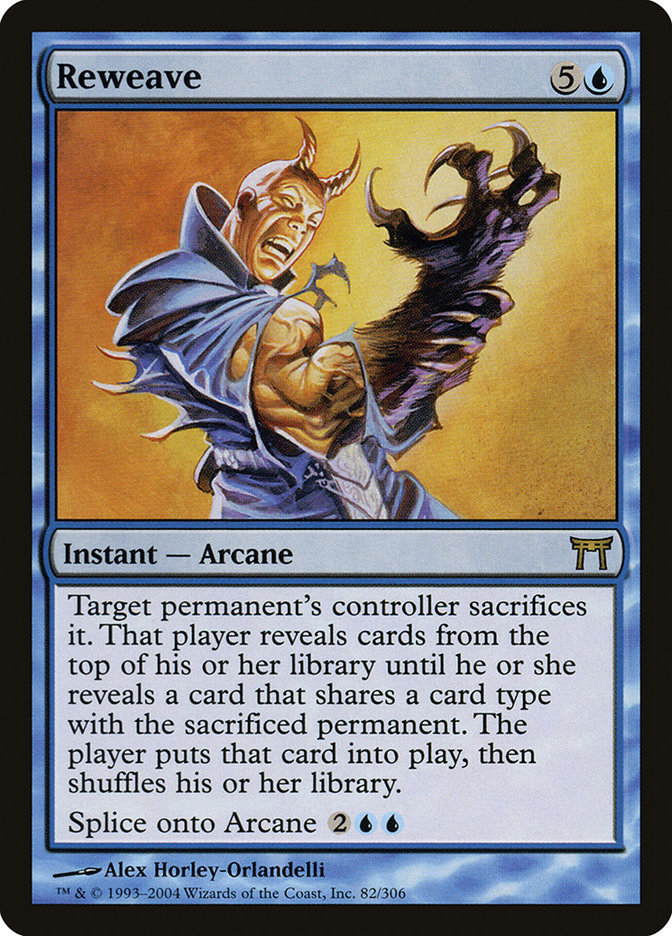 Reweave is a niche spell that can perform an overcosted Indomitable Creativity or Polymorph effect. And sometimes that’s good.

I’ve been trying out Reweave with a package of reasonable arcane spells like Eye of Nowhere and Eerie Procession in my Talrand, Sky Summoner deck. I use it and Polymorph to eat a drake and pull up one of the few creatures in the deck that can rock the board, like Scourge of Fleets.

There are still folks tryharding this in Modern. Self-mill, get Griselbrand in the graveyard, and then Goryo’s Vengeance!

That was all a lot more plausible before the Modern Horizons sets. This is a fine reanimator card for legends matters decks in Commander, especially with Obeka, Brute Chronologist.

Splice is really cool in concept, but it’s a bit clunky in execution. It doesn’t have to be, but it’s a difficult design space. Imagine the broken things if a card like Everdream could splice for only one mana.

I’d love to see it return, and I’d love WotC to explore the kinds of alternate costs they explored in Betrayers of Kamigawa with cards like Hundred-Talon Strike as a way to power up splice effects while avoiding some of the broken possibilities.

I like to run a few splice cards in my EDH decks, honestly mostly out of boomer nostalgia but also because there are a few interesting effects here that are worth playing with. Am I off the rails on this, or do we have some other skilled splicers out there? Let me know in the comments or over on Draftsim’s Twitter. 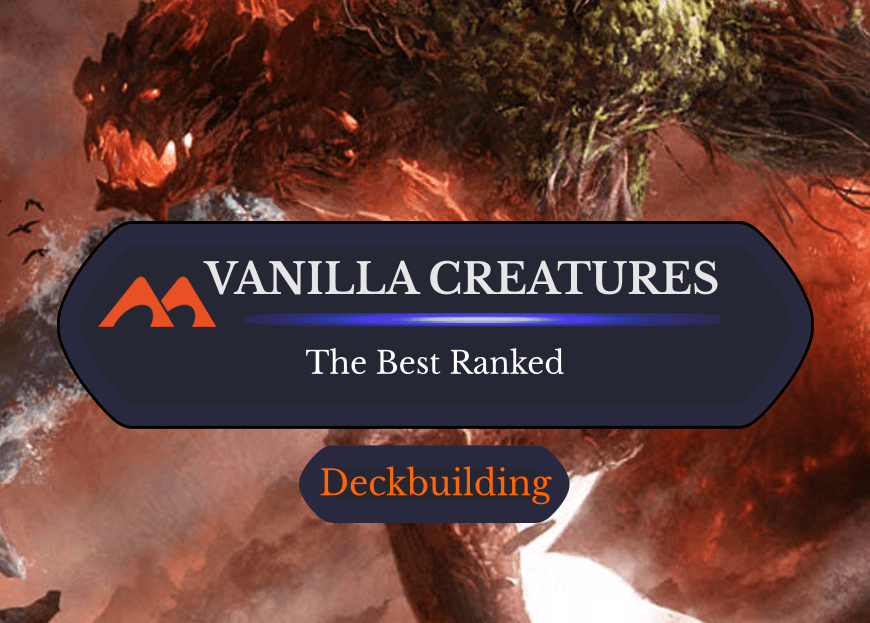 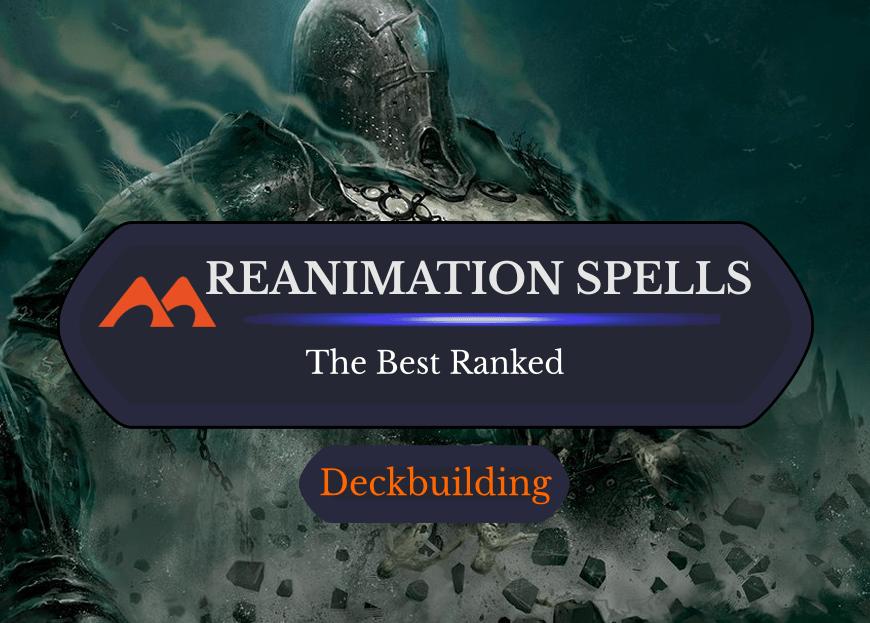