It’s time to make the fantastic, not-confusing-at-all rules of Magic a little easier. Today we’ll be talking about the goad mechanic. I’ll go over what it is, answer some often-confusing questions regarding the mechanic, and talk about the history of it.

Let’s break it down.

What Is Goad in MTG?

Goad is a keyword action that affects creatures. If a creature is affected by goad, it must attack a player other than the one that applied goad, if able. That’s it.

If you “goaded” your opponent, that opponent’s creatures must attack a player other than you if they can. These “if able” scenarios can get a bit confusing, but we’ll get into those situations in just a second. Goad can be applied to a player and can last as short as a single turn or indefinitely via a permanent aura attachment.

History of Goad in MTG

The most recent appearance of goad has been in Commander Legends: Battle for Baldur’s Gate, a Commander supplementary set. It’s featured on 14 cards, which solidifies it to be a rarer mechanic that, even when included, does not make a major appearance.

It isn’t a very common keyword. It seems WotC has intentionally kept it out of mainstream cards. They’ve reserved it for supplemental sets and Commander cards, and I doubt we’ll see it very often or in a Standard-legal set.

Can a Creature That’s Goaded Attack a Planeswalker?

Not usually. A goaded creature must attack a player other than the player that goaded it. But if it can’t attack an appropriate player for some reason, it could then attack a planeswalker to at least meet its “must attack” requirement.

Do Multiple Instances of Goad Have an Additional Affect?

Not from the same player. But if multiple players goad the same creature, then the effect is cumulative and those players can’t be attacked.

If a Creature Is Affected by a Propaganda-Type Card, Does a Goaded Player Have to Pay the Cost for Its Creature to Attack? 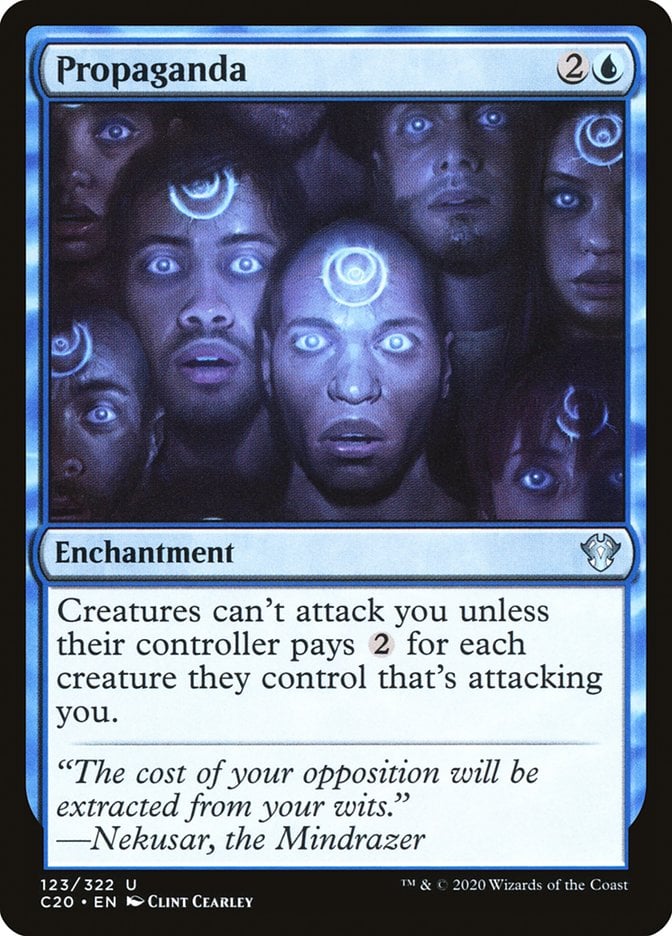 No, the player isn’t required to pay that affect. Since Propaganda prevents creatures from attacking unless a cost is paid, the player can choose not to pay it which means the creature can’t attack.

Would a Creature That Comes Into the Battlefield After Disrupt Decorum Was Cast Be Affected by Goad? 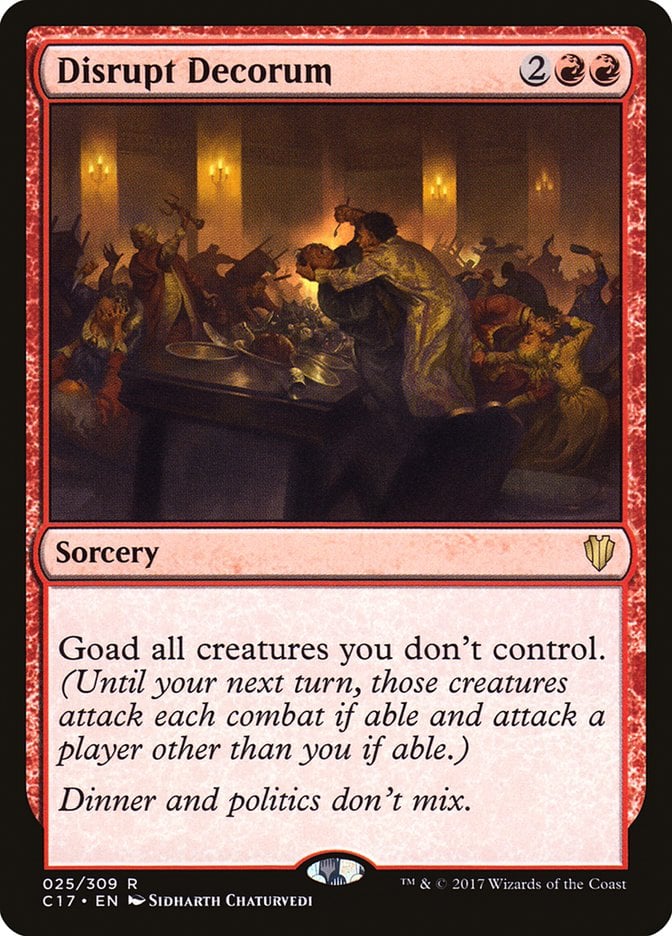 No, only creatures that were on the battlefield when Disrupt Decorum was cast are affected by goad.

What Colors are Goad Cards Focused on?

There are 15 cards with the goad keyword. The majority of them are in red and blue, but it has showed up in each of Magic’s five colors. There’s even an artifact with goad.

Goad’s flavor does feel red to me, though. Mostly because of the emotional taunting connotations of goading someone or something.

Since goad isn’t a very common keyword and is pretty specific, there aren’t a lot of great combos. The mechanic mostly applies to multiplayer. There are some interesting ones though, as well as a couple really cruel ones.

Bedlam is fun for an aggressive-style goad Commander deck. Goad other players and creatures that can’t be blocked and then finish off the last player after the mayhem.

Tainted Strike could be really cruel. Force your opponents to attack each other and then pump an unblocked creature with infect and other affects to finish them off. You’ll quickly become the favorite at the table with that one.

It would be cool to goad players and give them Karona, False God.

Here are some other cards that could be interesting with goad: Goblin War Drums, Caterwauling Boggart, Berserk, Lightmine Field, Aetherize, Aetherspouts, and Powerstone Minefield.

And if you’re looking for goad-focused Commander decks, Marisi Combat Tricks and Tahngarth the G.O.A.D. are good places to start.

That’s the breakdown of the goad mechanic. I don’t think it’s something we’ll see very often. When we do, it’ll probably be on Commander cards. I personally don’t care to see it more often. But that’s the great thing about Magic, there’s a mechanic for everyone. I’m sure there’s a goad lover out there.

Thanks for tuning in! Don’t forget to check out the rest of our content if you’re craving more MTG stuff. If you’re an Arena lover, may I suggest Arena Tutor? It’s an all-in-one application that uses AI to help you win more at MTGA. What’s not to love?