HomeCommanderHow Does the Commander Tax Work in EDH?

How Does the Commander Tax Work in EDH?

Commander is Magic’s most popular sanctioned format. It’s been around for quite a while, and it’s no surprise that it’s completely eclipsed other formats like Standard. It’s a fun, exciting format with plenty of possibilities and the added fun of multiplayer matches.

Helmed by your favorite legendary creatures, Commander paves the way for big plays and epic showdowns. But among all of this revelry, there has to be some ground rules. While it might be fun to watch chaos reign in a free-for-all, rules are what separates a game from, well, not a game. Enter the commander tax.

While it sounds super unfun and kind of like a buzzkill, it’s really not that bad. Your legendary commanders need something to douse their power level after all. So what is the commander tax? How does it work? What does it all mean?

How Does the Commander Tax Work?

To put it simply, the commander tax requires you to pay 2 additional mana on top of the casting cost of your commander for every time beyond the first you cast it from the command zone.

Let’s break this down, starting with how commanders work.

First thing’s first: the “command zone.” This is a place where special cards that affect the game in the same way that permanents do but that aren’t actually permanents go. The zone’s namesake commanders live here, obviously, but there’s also emblems, planes, phenomena, schemes, and dungeons, the most recent addition.

Your commander lives in this zone instead of ever being in your deck, which means you don’t need to draw them to play them. Because your commanders are always available to be played, there needed to be a way to make it harder for them to pop back into play if they’ve been killed in battle. For this reason, the Rules Committee came up with rule 903.8, colloquially known as the “commander tax:”

Whenever your commander changes zones from the battlefield to somewhere else, you have the option of moving it back to the command zone instead. Every time you do this, your commander is going to cost more to cast. This is the commander tax.

History of the Commander Tax

It would be incredibly easy to go infinite with many commanders if we didn’t have the commander tax. Think Rooftop Storm, a sac outlet like Ashnod’s Altar, and pretty much any zombie commander. This would be easy to do with other alternative costs and cost reducers, too.

This is but one of a myriad of exploits you could use if the commander tax wasn’t in place.

When Is the Commander Tax Applied?

Commander tax is applied whenever you try to recast your commander from the command zone.

It’s important to note that the commander tax only applies when you’re recasting from the command zone. If you use, Command Beacon to bounce your commander, you won’t have to pay the tax to cast it from your hand. The same applies if you’re putting the commander into play but not casting it.

When Does the Tax Increase?

The commander tax increases whenever your commander goes back to the command zone. This means that if your commander gets destroyed and you let it go to the graveyard (or any another zone), you won’t have to pay the tax if you end up casting it from there.

Does the Tax Count Towards Mana Value?

Are There Ways to Reduce the Commander Tax?

Cost reduction effects apply to commander tax. This means that if you’ve got a card like Animar, Soul of Elements, its third effect reduces the cost the next time you cast your commander.

Is There Any Limit to the Tax?

No, the commander tax increases by regardless of how many times you’ve already paid it every time you try to recast your commander.

Do Partner Commanders Get Taxed?

Commander tax works on partner commanders just like regular commanders. With that being said, the way they’re treated might not be so intuitive. Each partner is treated as a separate commander.

This means that if you’ve cast Silas Renn, Seeker Adept from the command zone twice but you’ve yet to cast Ich-Tekik, Salvage Splicer, then Silas Renn will cost an additional for a total of , but Ich-Tekik will still cost its regular .

How Does it Work with Fist of Suns?

Unfortunately, Fist of Suns will not save you from paying the commander tax. This is because it’s a cost replacement effect, rather than a cost reduction one. This means that you still need to pay any additional costs like the tax, although it could still make the total cost of your commander a little easier to bear.

What About Rooftop Storm?

Much like Fist of Suns, Rooftop Storm is a cost replacement effect. This means that it won’t allow you to get out of paying the commander tax. It does mean that you basically only have to pay the tax if your commander is a zombie creature, though, so it’s definitely still useful.

How About Zahid, Djinn of the Lamp?

Although Zahid, Djinn of the Lamp sounds like it might let you skimp on the commander tax at first glance, this is actually yet another cost replacement effect. It works exactly how it reads: you may tap an untapped artifact and pay instead of , plus whatever additional costs are imposed upon Zahid (like the tax).

Do You Have to Pay the Tax for Ninjutsu?

Regular ninjutsu abilities like on Sakashima’s Student don’t actually let you cast from the command zone. Ninjutsu is an activated ability that only works while the card is in your hand. You have to reveal the card from your hand and return an unblocked attacking creature you control to your hand in order to put the ninjutsu card onto the battlefield tapped and attacking. The command zone is completely absent from this scenario, so it doesn’t get around the tax.

But there is a kind of ninjutsu that works with the command zone. This is called “commander ninjutsu” and it appears on Yuriko, the Tiger’s Shadow. This card lets you bounce an unblocked attacker back to your hand in order to put Yuriko from the command zone onto the battlefield tapped and attacking.

This actually does get around the commander tax because rather than casting Yuriko, commander ninjutsu merely puts it onto the battlefield. This makes Yuriko one of the few commanders with a built-in way to cheat the tax.

Does Dash Ignore the Tax?

You might think that Ragavan, Nimble Pilferer might be able to avoid the commander tax due to its dash keyword. However, dash is yet another cost replacement effect, meaning that you’ll have to pay the tax even if you dash your commander out.

With that being said, it does return to your hand from the field rather than the command zone. This means that you’ll have an easier time avoiding the tax.

Does Jodah, Archmage Eternal Get Around the Commander Tax?

No, unfortunately this does not work. Jodah, Archmage Eternal‘s ability is another cost replacement effect, which means that the commander tax will be added to the cost. No cheating this time!

Can You Proliferate the Commander Tax?

Since proliferate only works on counters, it doesn’t do anything to commander tax. Remember that it’s simply an additional cost, rather than a counter or similar mechanic.

Tax Aversion: Ways to Get Around the Commander Tax

Like the above-mentioned Yuriko, the Tiger’s Shadow, there are some commanders that have built-in ways to avoid the tax. Derevi, Empyrial Tactician is another example of this. Its ability lets you bypass commander tax entirely and cast it for the same cost at all times.

Commanders like these are great for commander-centric decks because you can still replay them without paying more mana even if your commander’s getting hated out. Keep in mind that most of these commanders are disliked at casual pods because of their tendency to snowball the game.

Commanders That Don’t Go Back To The Command Zone

What better way to avoid the commander tax than to never have to pay it in the first place? There are numerous commanders that avoid ever going back to the command zone. This is accomplished through being able to be cast from the graveyard, returning to your hand, or even being cast from exile. Here’s a list of commanders that have such abilities:

Using a commander like Ghalta, Primal Hunger helps you get around commander tax by reducing your commander’s cost. This also reduces the tax as I already mentioned. Liesa, Shroud of Dusk, on the other hand, allows you to pay life in replace of the commander tax. There is of course also Emry, Lurker of the Loch, who has a discount based on the number of artifacts you control.

Karador, Ghost Chieftain, Licia, Sanguine Tribune, and Torgaar, Famine Incarnate all have similar discount abilities, but with a narrower focus.

While this kind of commander tax protection is less powerful than just straight up avoiding it, it still lets you rely on your commander more than usual. Plus, you’re probably losing anyways if you’re at a point where you don’t have the mana to slam down Ghalta.

Command Beacon is a rather unique case in that it’s a non-creature card that lets you completely bypass commander tax. The Beacon is worth running in your deck if you have a higher mana value commander or a commanders with odd casting restrictions like Haakon, Stromgald Scourge.

A rather simple way to get around commander tax is to bounce your commander to your hand in response to removal. The same goes for reanimating it out of your graveyard. Sometimes you’ll want to let your opponent put your commander in the graveyard so that you can reanimate it.

While these methods are generally less effective since they tend to cost more cards and mana, they can still be used to avoid the tax in a pinch.

Zahid, Djinn of the Lamp | Illustration by Magali Villeneuve

The commander tax can often be a frustrating rule, but it’s necessary for the balance of the format. If Commander were to go tax-less, that would empower low-mana value commanders even more and de-incentivize interaction.

After all, spending a Path to Exile to remove Isamaru, Hound of Konda becomes mana-neutral and card-negative without the tax. This is exacerbated in interacting with some cEDH decks that revolve around their commander, and a couple of removal spells can really ruin their day.

Removing it would make for less interactive games with people rushing to get their commanders down as soon as possible. There might be some room for tweaking, like maybe commanders above a certain mana value would only pay the tax after the first one or two recasts.

All in all, commander tax is an excellent, albeit sometimes confusing, rule that makes games more interactive and engaging. What do you think of the tax? Do you wish the RC experimented with rules more? Let us know in the comments below! 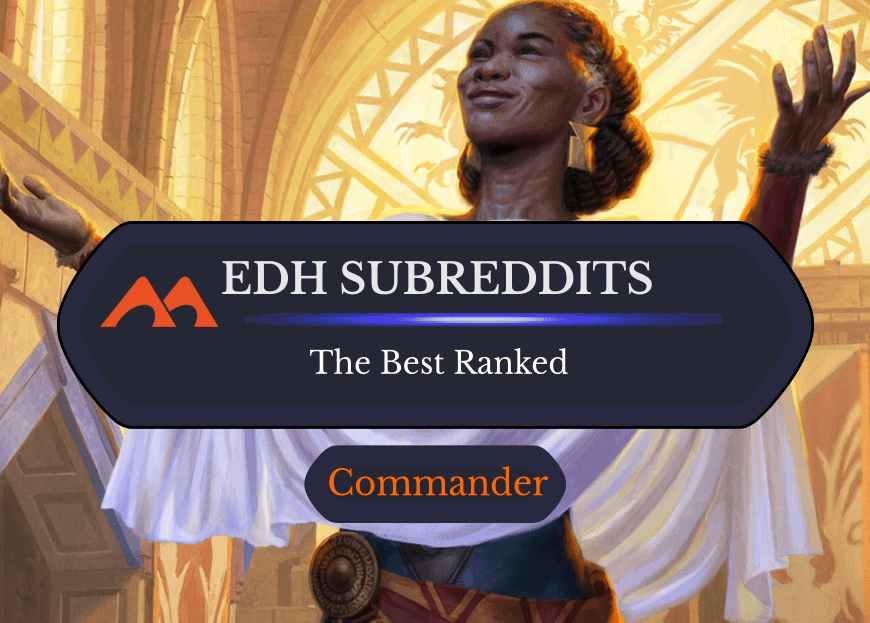