HomeCollectingTheme Boosters vs. Jumpstart Boosters: Which...

Theme Boosters vs. Jumpstart Boosters: Which Should You Get?

For Magic players who’ve missed both of these products in the last few years, this is a good time for a retrospective comparison and a look at which individual boosters you might want to pick up, if you can find them. So today let’s take a look at theme and Jumpstart boosters, and the differences between them.

The Difference Between Theme and Jumpstart Boosters

The 35 cards in theme boosters are all cards from the premier set they’re associated with. There’s a changing ratio of commons and uncommons as well as one rare with the possibility of a second.

The theme in these boosters was originally by color, usually mono-colored, but it pivoted to guilds for the Ravnica sets, schools for Strixhaven, and family for New Capenna. There were also more specialty theme boosters, like the Vikings packs for Kaldheim. These packs were designed to provide players resources for building decks. They’re a casual player’s product.

You can imagine that these cards plus 25 lands would get you some level of playable deck. Players have tried this head-to-head as a nice casual battle, and some local game stores run that kind of event with maybe a regular booster thrown into the mix.

Each Jumpstart pack has 7 or 8 lands and 10 to 12 common and uncommons at various rates for each deck, with at least one rare and the possibility of a second. Two of the lands will be foil basics and there’ll be one rare or mythic and one unique Jumpstart rare starting with Dominaria United.

Most of the cards in the original Jumpstart products were reprints, with 37 brand new cards that aren’t legal in Standard, Pioneer, or Modern. The cards will be from the concurrent premier set except for the mechanically distinct Jumpstart rare starting with Dominaria United.

This product is designed as a kind of gateway Magic product. You get two packs, shuffle them up, and you’re ready to play. These are still fun for casual players and the themes allow for some deckbuilding foundations, but the unique rares also make them into a bit of a chase product for experienced Magic players.

An easy-to-use product for new players that can support LGS play which is also at a power level interesting enough for experienced players seems like a good idea. And obviously it’s a good enough idea to supplant theme boosters.

Which is Better? Theme or Jumpstart Boosters?

There were only two theme booster runs with unique cards slotted into the packs: Theros: Beyond Death and for Kaldheim. But Jumpstart packs have cards from across Magic’s history, including some key commons and uncommons newer players may not own, as well as unique rares.

Theme boosters are generally the products that are best when they provide the most aid in teaching newer players how to play Magic, or to make deckbuilding lessons easier. There aren’t a lot of other reasons to seek these packs out.

Here are the top twelve:

#8. D&D: Adventures in the Forgotten Realms 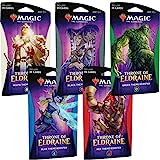 Magic The Gathering MTG-ELD-TBD-EN Throne of Eldraine Theme Boosters-Set of 5
$45.99
Buy on Amazon 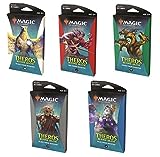 GET All 5! MTG Magic the Gathering Theros Beyond Death Theme Booster 35-Card Packs (1 of Each Color)
$59.99
Buy on Amazon 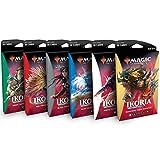 #3. Guilds of Ravnica and Ravnica Allegiance 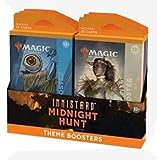 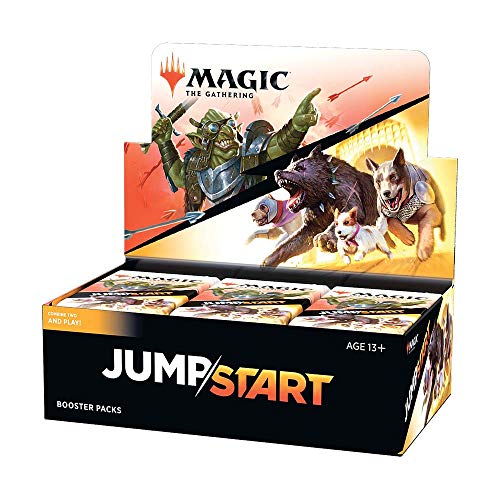 In terms of game play, the best Jumpstart booster to pick is not an easy question. Picking a pack that seems more flexible with whatever your second pack could be seems wise. And there are some very valuable cards in these packs, all of which are legal for Commander. But there’s also some risk and randomness built in.

The rankings below are based on the most reasonable chance of opening value.

One quarter of the Dinosaur packs have Selvala, Heart of the Wilds, valued at just over $10. Half of the packs have Ghalta, Primal Hunger, which isn’t in the same monetary ballpark but it’s a nice card to have for your green EDH decks if you don’t have one. And it turns out to be one of the easiest to get to wincons in Jumpstart if paired with another creature deck.

One fourth of the Minions packs have Phyrexian Tower, a key card for black in EDH worth almost $15. Half of the other packs will give you Kels, Fight Fixer, a cool card that’s become a bulk rare. And a quarter of the packs have Ghoulcaller Gisa, which is a fine but not very valuable card.

These are surprisingly high curve for a deck called “Minions,” so don’t expect this to be the fast creature deck you’re looking for in a Jumpstart game.

Vampires is a hunt for Exquisite Blood, the $20 combo piece. But that’s in one of four packs. Half give you Vito, Thorn of the Dusk Rose and one quarter have Drana, Liberator of Malakir. Great cards, but not exactly high value.

Otherwise this is an effective deck that pairs with almost anything else in a Jumpstart game.

Tinybones, Trinket Thief is the discard commander you want if your table has banned Tergrid, God of Fright. This Jumpstart exclusive is in half of the two Discarding builds. Although there’s not a lot of value in the other build and discard isn’t a very competitive Jumpstart deck, the odds are good here.

Half of the Angel packs have Linvala, Keeper of Silence, a control and stax winner at just under $15. The other half have Baneslayer Angel, which is a less valuable but obviously good card. The curve on angels can be pretty high in Jumpstart (just like in all formats), and that’s not always the right pick in a game of Jumpstart.

There are two versions of the Lands pack, one of which has the $15 Cube staple Oracle of Mul Daya. The other has the much less valuable Ulvenwald Hydra. The decks both ramp nicely, which make this a useful choice to pair with any non aggro deck in a Jumpstart game.

Half of the Reanimated packs give you what may be the most important card in the archetype, the namesake Reanimate. One of the others gives you Rise of the Dark Realms. So that’s a 75% chance to nab one of those, each worth almost $10. The other option is still a powerful deck for Jumpstart itself but doesn’t give the same value.

There may be no more important card for blue in Commander than Rhystic Study. It’s how you dig up your other candidates for best blue card. The trouble is that you’re looking at a roughly 25% chance of opening it, and the other blue rares in these packs aren’t great.

But the Study is worth over $30 if you’re feeling lucky. This is a good backbone to pair with other spell-heavy decks in a game of Jumpstart, even if you don’t pull the chase card.

There’s one deck for the Unicorns pack, and it has Emiel the Blessed, $12 blink all-star. It’s also a plausible unicorn tribal commander and the deck has quite a few unicorns you’d need for that EDH deck if you happen to love magic and equines with dramatic hairdos.

This is a bit underpowered in a game of Jumpstart, but there’s also a Cloudshift to lean into blink if you have another ETB-oriented deck to pair it with, like the Rogues or Legion decks.

There’s one Phyrexian pack with reanimator staple Sheoldred, Whispering One, coming in at a lucky $13. A sure thing is a sure thing, and this deck is also a great pick to actually win a game of Jumpstart since it has Entomber Exarch and Phyrexian Reclamation to keep the graveyard churning.

Ready to be the bad guy? There’s only one decklist for the Milling pack, which means you’re guaranteed to pull Bruvac the Grandiloquent, a $25 card that’s also a key part of any successful mill deck in EDH, perhaps even as commander.

The curve on this deck is pretty high if you’re trying to win a game of Jumpstart, so maybe pick a different deck if higher stakes are on the line than the Bruvac you’re taking home.

Would you rather have Craterhoof Behemoth or Allosaurus Shepherd? You can’t go wrong really if you play elves, and both cards are two of the three most valuable cards in the set, each over $30.

The Shepherd is the most difficult to find as a unique Jumpstart card. Craterhoof is perhaps the classic green wincon, but a turn 1 Shepherd really improves your chances of surviving to find the Behemoth. And both elves decks work just as smoothly as you’d expect them to in a game of Jumpstart. 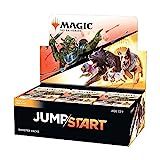 Will Jumpstart decks be stacked with chase rares and mythics with a pretty decent odds of acquisition when Dominaria United packs drop? We’ll find out soon enough, but for now there are a lot of great Jumpstart boosters to grab if you can find them. If you didn’t get the chance to play Jumpstart when it rolled out in that first pandemic summer, in paper or on Arena, it’s a pretty fun way to play some casual Magic and introduce friends to the game.

Compared to theme boosters, Jumpstart boosters are better for players at all ranges of the Magic spectrum. I for one am looking forward to a more consistent release cycle of the product to be able to crack into at my LGS.

What are your thoughts on these two packs? Do you wish theme boosters were sticking around, or are you happy to see Jumpstart boosters taking the spotlight? Let me know in the comments down below or over on Draftsim’s Twitter. 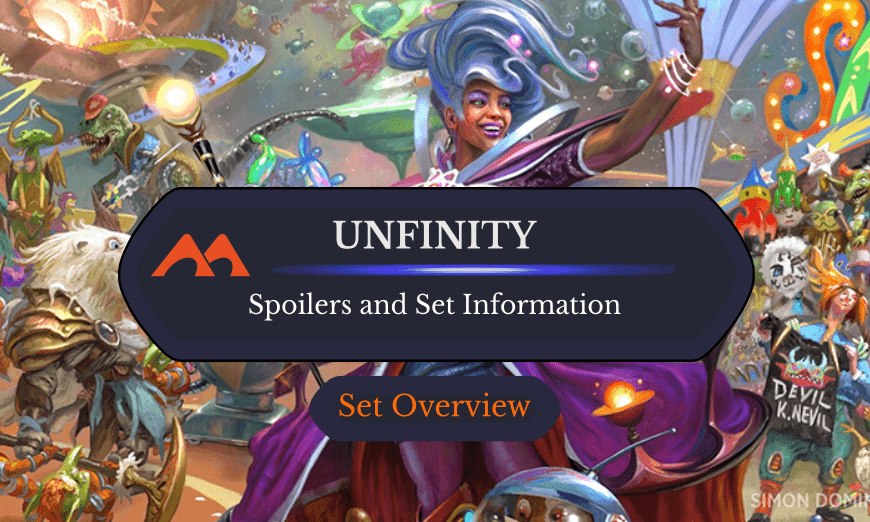 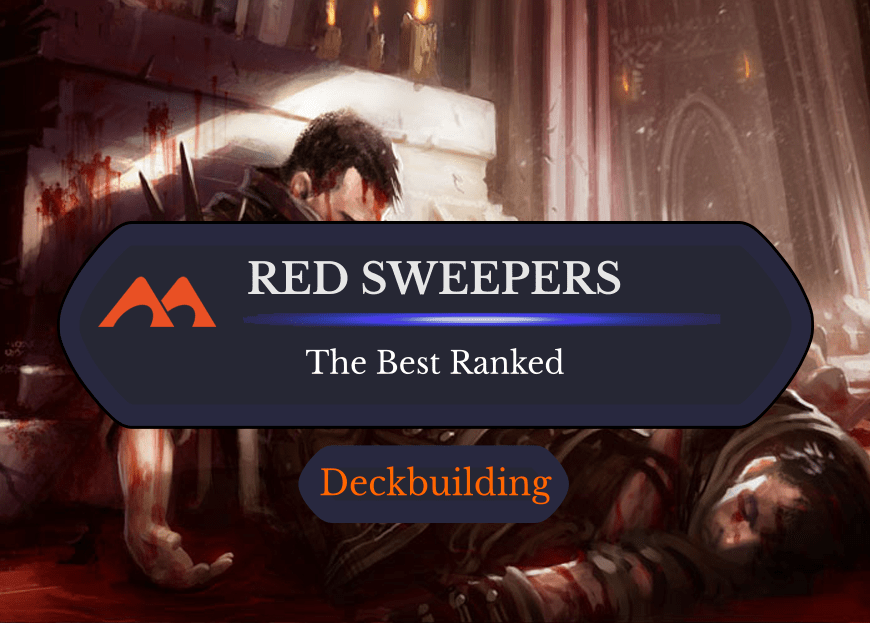