Looking to get ready to play DMU? Check out our Limited set review, Ultimate Draft Guide, and Ultimate Sealed Guide!

Magic’s 30th anniversary is just around the corner, and what better way to celebrate than by returning to the plane where it all began, Dominaria! Magic’s next Standard set will be Dominaria United, which releases in early September of 2022.

Few details regarding the set and story are available but WotC has confirmed that the main story arch will take place over four sets and unravel all sorts of previously unknown info about the Multiverse and planes we all thought we knew so well.

There’s lots of key details and important dates you need to know, so let’s get started!

Dominaria United’s story goes back to where Magic’s story began: the plane of Dominaria. Little is known with regards to the details or plot, but the main story arc is said to span across four sets, where the ultimate mysteries and the fate of the plane—as well as the Multiverse—will be uncovered.

In Dominaria United, the Phyrexians have returned, and an appropriate coalition of Magic’s greatest heroes has been formed to counter the assault. We’ve got everyone from Karn to Liliana ready to fight this common enemy in an Infinity-War-esque set.

Not everyone is who they seem, however. We already know multiple planeswalkers—and airships—have been compleated as part of the Phyrexian’s goal of taking over Dominaria. There even may be a few Eldrazi lurking around corners, but we’ll have to wait and find out!

Read ahead is an interesting new twist coming to a saga card near you. The mechanic allows for you to choose what chapter the saga enters the battlefield in! So in the instance of The Phasing of Zhalfir, this card could act as a 4-mana sorcery-speed board wipe with no additional effects, or a board wipe that phases a creature for one or two turns! This gives these specific sagas additional flexibility, which may just prove to be quite powerful.

Next up we’ve got domain, which is actually a returning mechanic from Conflux! It’s a fairly straightforward mechanic which functions off you having multiple basic land types in play. In the case of Nishoba Brawler, one of the new cards, it gains power equal to your domain.

Yep, it’s a kicker set. Kicker is an all-time classic, which one could argue all mechanics are derived from. It’s an additional cost that can be paid when you cast a spell with kicker to gain additional benefits if it was kicked. Some cards can be kicked multiple times, others just once or twice, but, regardless, you’ve probably seen this one before.

Stun counters are a new type of counter coming in Dominaria United. They’re put on tapped permanents, mostly creatures, and prevent them from being untapped. If a creature with a stun counter would be untapped, instead, you remove a stun counter. Plain and simple.

Enlist is a new attacking mechanic which allows an attacking creature to tap another non-attacking creature—without summoning sickness—and gain power equal to that creature’s power. Creatures with enlist gain some kind of temporary benefit in addition to the power buff, and in the instance of Guardian of New Benalia, that comes in the form of letting you scry 2.

The Tabernacle at Pendrell Vale | Illustration by Nicola Leonard

You read that right. WotC claimed that in a warehouse “just far enough away”, there were cases upon cases of sealed Legends products. They cracked all of these packs themselves, and were greeted with, well, cards from Legends!

They’ve used this as an opportunity to promote Dominaria United, and have inserted these random Legends cards into DMU collector boosters. 3% of collector boosters will supposedly having these cards inserted, with roughly 75 cards being exempt because they simply weren’t opened. So while you can’t open a new Mana Drain, you can still possibly open up a fresh mint Tabernacle at Pendrell Vale

Liliana of the Veil

Yes, you read that right! Liliana of the Veil is being printed into Standard and Pioneer! It’s been a long time since this old classic wrecked havoc in a constructed format—no thanks to Modern Horizons 2—but she’s coming back for more!

While they’re certainly no Liliana of the Veil, the pain lands are back for more! These are some of the best fixing in Standard and Pioneer, and the allied ones haven’t been printed since Tenth Edition, which means some much needed mana fixing will be coming to Pioneer! 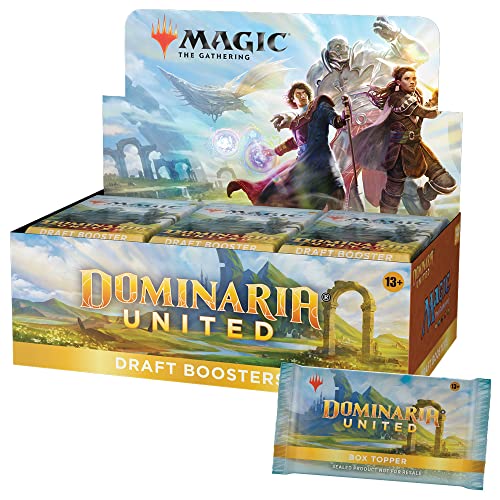 Draft boosters are, well, made to be drafted with! They’re your classic booster pack. Dominaria United is obviously going to include these in their product line, and they won’t be anywhere near the last set to have them. The Dominaria United draft boosters feature art of Karn, Jodah, Archmage Eternal, and Shanna, Sisay’s Legacy (in front of the Weatherlight?). 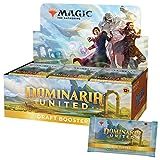 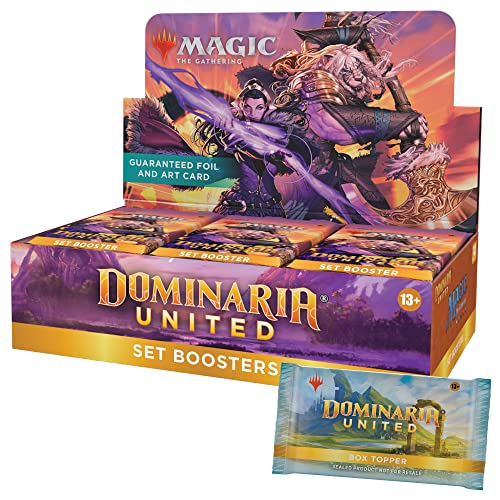 Set boosters are boosters that aren’t meant to be drafted with. They’re an alternative style of pack made to be cracked. They feature more rares and uncommons as well as cards with alternate arts and foil versions. Buying a set booster box also includes a foil box topper card, which is yet to be revealed. The Dominaria United set boosters feature art of Liliana Vess and Ajani Goldmane mid-battle. 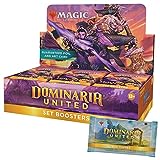 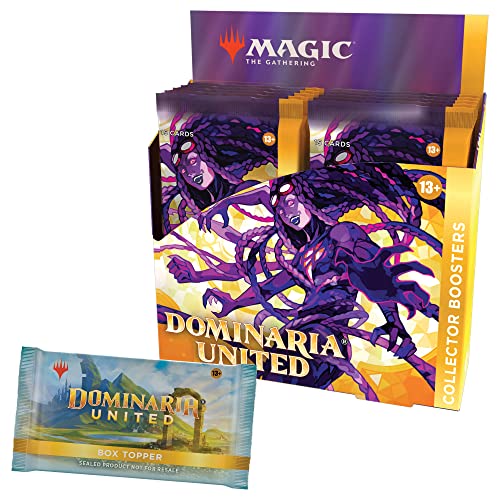 Collector boosters return with another set. These are like set boosters on steroids. They include at least 10 foil cards and at least five rares. They’re super fun to open up because you’re always excited about the next card, even if it’s just an uncommon. The Dominaria United collector boosters featured stylized art of a nightmare version of Braids. 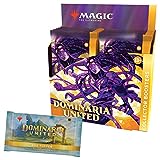 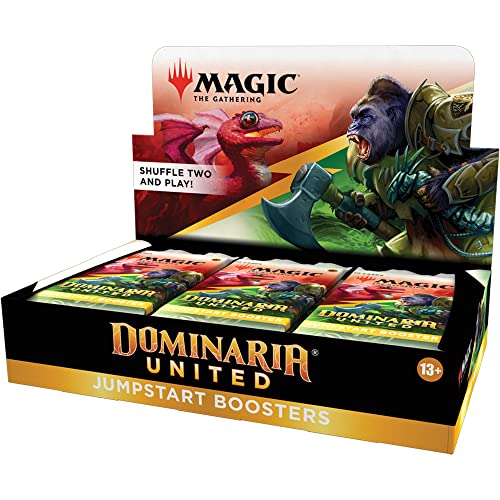 One of the more interesting returns are Jumpstart boosters! Dominaria United Jumpstart boosters are theme-specific packs that are meant to be shuffled together and played with right away. They have a rare, some basic lands, two of which are foil, and plenty of filler to make a complete deck. 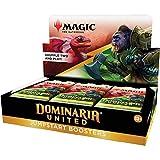 Prerelease packs are available during sealed prerelease events. The idea behind this product is to give new players a look at the set and what to expect from it along with some goodies to whet your appetite for the set. The Dominaria United prerelease packs feature art of a crowd gathering under Apocalypse’s Coalition Flag. 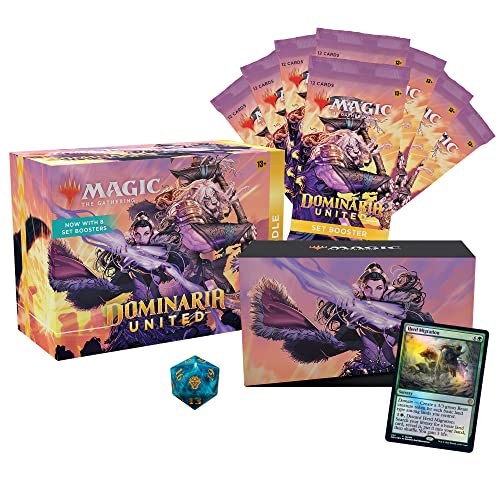 Set bundles are what you want if the set really speaks to you. This has everything you need to get started in a new format, add to your collection, or enjoy a new set with your friends! The Dominaria United bundles sport Liliana/Ajani art as the set boosters. 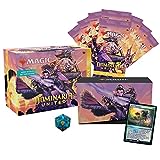 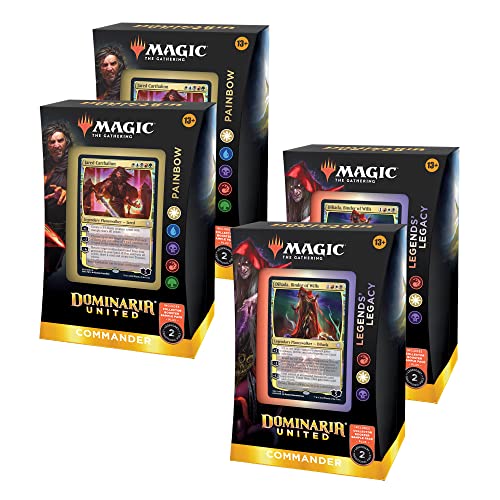 The Dominaria United EDH decks are still shrouded in secrecy. All we know right now is that there will be two Commander precons with this set, and there will be a multicolor focus. That’s it, that’s all. 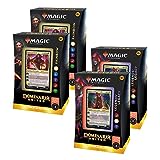 There’s still plenty of details to learn about Dominaria United. WotC has barely given us a taste of the set, and there will be plenty more to come. I’m very excited to see the returning mechanics (and maybe even returning cards and characters) that we’ll get to open in just a few months.

What do you think about this new set? Are you excited about another return set coming up? Or do you think it’s a little too much, with the supplemental sets and all, coming out while Streets of New Capenna is barely three weeks old? Let me know what you think down in the comments, or head over to talk about it in the official Draftsim Discord. And if you’re planning on playing in the prerelease, check out our limited set review for DMU! 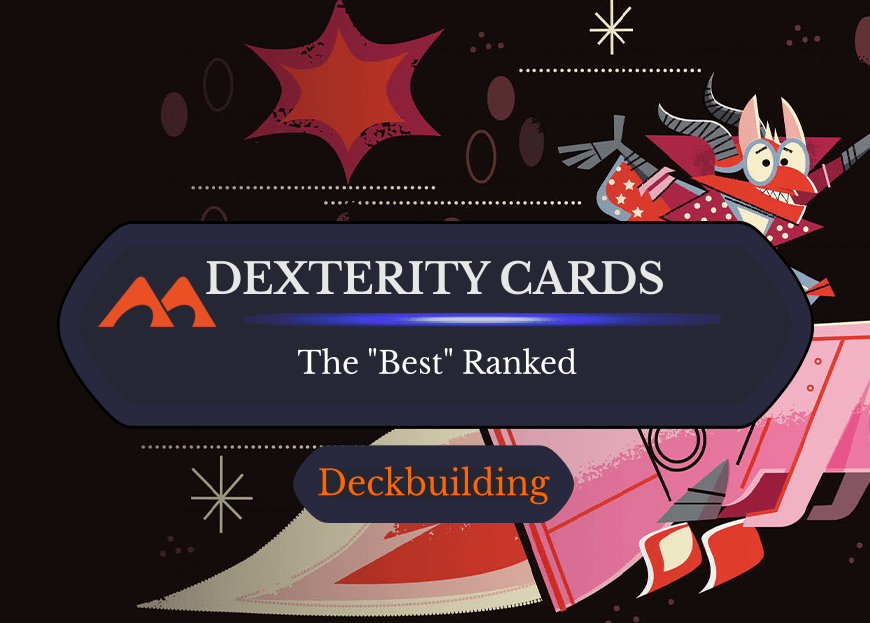