Unfinity is coming, and if there’s one thing that these Un-sets are known for (outside of wacky mechanics and dubious-to-hilarious in jokes), it’s some of the best looking lands you’ve ever seen. But with the increased number of sets containing full-art basics, Wizards needed to ramp up their offerings this time.

Well, they certainly did that. Let’s check it out!

Starting off with the basic lands, Un-sets have provided some of the most beautiful basic lands, with art from the likes of Chris Rush and John Avon.

As Unfinity is a set themed around space, we’re getting space-themed basic lands called “Space-ic lands.” Don’t blame me, I didn’t name them! They’re all illustrated by Adam Paquette and come in two different versions.

The first set of Space-ics are the planetary Space-ic Lands. The art on these is set on alien worlds similar to what you might expect to see in a sci-fi movie.

I like how they all have this curved and circular feel to them, but they feel like they’re from completely different worlds at the same time.

The other half of the Space-ics are known as orbital lands. Instead of showing the surface of some alien world they show the view of the planet from space. I think these are even nicer than the planetary ones because they’re so strikingly different than anything we’ve seen before, even in this time of plentiful basic lands.

I also love how Paquette has been able to make them look quite different from each other with the perspectives of the planets. It’s not just white planet, blue planet, etc. The Plains in particular is a really interesting take on a “Plains planet.”

Where to Get Space-ic Lands

Space-ic lands can be found in both draft boosters and collector boosters. 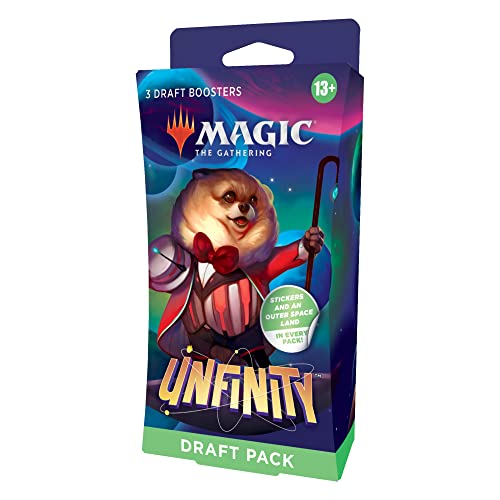 Unfinity draft boosters (booster box) have a basic land slot as normal that will be a planetary Space-ic about seven out of ten times (71.9%). One in four draft boosters (24%) will have an orbital Space-ic. There’s also a traditional foil slot that replaces a common in one-third of packs. 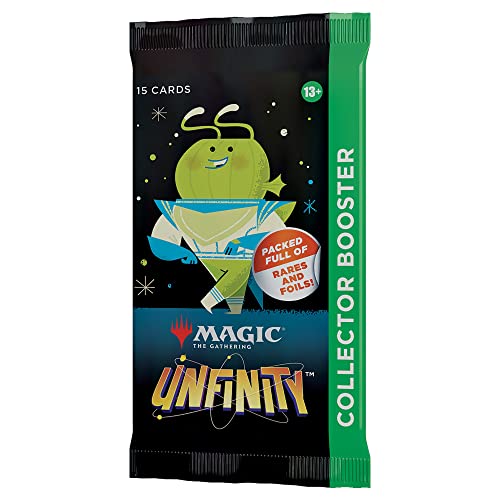 Unfinity collector boosters (booster box) have two slots for Space-ics with the same distribution as draft boosters. One of these slots is a traditional foil while the other is a “galaxy foil” which will apparently have stars and planets included in the foiling process.

The mathematically astute of you have no doubt noticed that the percentages mentioned above don’t quite add up. This is because you also have a chance to pull full-art shock lands.

As an addition to the land offering this time, we’re getting reprints of a popular shock land cycle. Usually linked with the plane of Ravnica, they were designed to be used on any world in MTG, and that’s certainly being used here.

Each of the shock lands has been printed in a borderless version, with artwork of a similar theme to the Space-ics. Some are depictions of alien worlds like the planetary versions while others are similar to the orbital style.

While I think my favorite artwork here is the simple yet complex Godless Shrine by Bruce Brenneise, I love the direction that Overgrown Tomb by Cliff Childs, which is like nothing that I would have thought of for a land. The wreck of a spaceship, a land for the people who may have lived there at one time, works so well.

Where to Get Borderless Shock Lands

Borderless shock lands can be found in all types of boosters. they’ll replace a basic land anywhere where a basic appears about 4% of the time. There’s double the chance to find one in a collector booster (8.2%) since there are two slots where you can pull them (either in traditional or galaxy foil).

You can also get a guaranteed shock land as a box topper. You get one box topper in either style of box along with a single foil shock.

There are some lands included in the main set, too. These use some of the traditional whacky Un-set mechanics.

Urza’s Fun House is the fourth Urza’s land (kinda, wait a moment for that), coming after Urza’s Mine, Urza’s Tower, and Urza’s Tower. This one isn’t legal in any eternal formats.

Of course, the gimmick is you get to make a lot of mana with each of them (and seven mana if you have one of each) if you have all three original Tron lands out. But if you get this one out too you can literally make infinite mana (there’s surely a Buzz Lightyear joke in there somewhere).

The final ability, to head to AskUrza.com is… Well, I’ll leave you to find that bit out for yourself. I’ll just say that it’s worth the seven mana. Probably.

I hinted towards another Urza’s land, and Nearby Planet is kinda-sorta it. It has rangeling, a riff on changeling that shapeshifters have, except this gives all land types instead of all creature types.

This land can tap for any color of mana since it also has all basic land types but isn’t a basic. You do need to pay one when it comes in, but we know that Rupture Spire is playable in Limited.

It wouldn’t be an Un-set if we didn’t have anything referencing things that are going on outside of the game itself. Just make sure you go to your Draft wearing a top with all five mana colors on it if you’re planning on playing The Big Top.

Make sure you tap it for purple at some point too, for extra style points!

So now you know about these gorgeous lands (as well as the funny ones) and where to find them. Do you have any favorites out of them all? Do you have a silly Un-set land design you’d love to see in future? Let me know in the comments below or over in the Draftsim Discord.

Good luck in your Un-Drafts! The 27 Best Devils in Magic