The Time Spiral block is a beloved point in MTG’s history with more than a handful of iconic cards and an exciting theme as the cherry on top. With remastered sets setting themselves up as a good way for Wizards to pump old favorites back into our view, it’s only natural that Time Spiral Remastered is on its way.

Let’s peer into the not-so-distant future and see what’s in store for us!

Time Spiral Remastered is sitting in a different spot compared to its Amonkhet and Kaladesh predecessors. While those sets were featured on MTG Arena, Time Spiral will be remastered solely for paper Magic. This unfortunately means we won’t be able to experience the set on Arena like we got to with the previous remasters.

There was, however, a special release event on Magic Online. The launch party started on March 19 and ended on March 20, with WotC supporting remote play on a discord server partnered with the people of ChannelFireball. Booster packs will also be available at your local game store.

That said, this set is similar to those before it in that it won’t be Standard-legal. As for eternal formats, the legality will depend on each card individually. This is a reprint set, so don’t expect a change in where these cards can be played.

Since this is a remaster of the original Time Spiral block, it’s a pretty easy call to say the theme and flavor of the set will be the same. It’s all about time: past, present, and future. Cards with mechanics and effects based around time are likely to be reprinted. This could bring back some cards that like to punish or play off things that have happened, that are happening, and that will happen on the battlefield.

A good example is the Ezrith cycle of cards. These consist of Premature Burial, Cradle to Grave, and Grave Peril. These cards destroy a creature in the past, in the same turn, and on a future turn respectively. While those cards aren’t confirmed to be coming back just yet, they’re a good example of the Time Spiral theme.

That said, there’s probably an elephant in the room you’re wondering about right now…

Oh, glorious timeshifted turns, how I love them! They played a huge part in the mechanics that revolved around Time Spiral’s theme during the original printing. There were three types: timeshifted, planeshifted (or colorshifted), and futureshifted.

Futureshifted cards were all about being “pre-prints:” Cards that didn’t exist until that point and were guaranteed to show up in later sets like Boldwyr Intimidator. Planeshifted cards were familiar effects in different colors as if they were alternate reality prints. An example of this would be Damnation being Wrath of God in black. Finally, Timeshifted cards were a bunch of pre-Mirrodin reprints that kept their old border as if being brought up from the past.

Now we’ve got a new set of timeshifted cards in the remastered set, but they’re all from Magic’s Modern era. They’re reprinted with the pre-Mirrodin border as well!

Speaking of fast, nothing can beat this mechanic! This is what split second says: “As long as this spell is on the stack, players can’t cast spells or activate abilities that aren’t mana abilities.”

Basically, the card with the split second ability will always resolve first. But, a new ruling that went into effect on March 19, 2021 added a little stipulation to that: “players may turn face-down creatures face-up while a spell with split second is on the stack.” So, if your face-down card has a trigger ability “counter target spell when faced-up,” you can now finally counter these annoying split second spells like Angel’s Grace.

Well, the colorless and typeless 2/2 creatures are here again to surprise you with their “turned face-up” abilities!

Morph creatures will always have you thinking, “what could be hiding under there?” Should I cast my wincon? What’s in that card!?

To sum up this ability, you simple cast a card with morph for three colorless mana and you get a 2/2 colorless creature. You can then turn that creature face-up for its morph cost and trigger its ability.

Another powerful mechanic is back! This will be the only kind of suspension you’ll be excited for. Rather than casting the card for its mana cost, you may exile it with N time counters, where “N” is the number after the word “suspend,” by paying the suspend cost. At the beginning of your upkeep, you remove a time counter. When the last counter is removed, cast the card without paying its mana cost. It also has haste.

Yep, the graveyard shenanigans are also here. Remember the ever-popular Snapcaster Mage? It’s a card that gives you the power to reuse an instant or sorcery in your graveyard. You can now do that again without the help of the Mage!

Flashback is simple yet very powerful, and can get you out of tough spots or snowball the game to get you the win.

Yes! Another mechanic that I’m excited to use. The buyback mechanic lets you use the ability of a card without actually using the card. How broken is that? Imagine using the same card every turn as long as you can pay the buyback cost. Simply crazy. Card advantage forever! I hope I get lots of these in my pre-release kit.

Ah, the almost-unblockable creatures. I’m sure you can imagine how annoying having something attacking you that can’t be stopped could be. These dark creatures are back to be your trump cards and get your opponent’s life all the way down to 0.

You can simply think of this creatures as very powerful for their mana cost, but with an expiration date. Vanishing is kind of the opposite of suspend. When the last time counter is removed, you just sacrifice the card. You might doubt the power of vanishing cards, but take a look at Calciderm. A 5/5 for four mana with shroud is amazing at taking a huge chunk of life from your opponent. Definitely worth it.

Ah yes, the echo mechanic makes its return. I may not be the biggest fan of this mechanic, but just look at Firemay Kavu. A 4/2 blocker with a built-in removal? Yes, please!

Creatures with echo usually have powerful ETB triggers that can block, and you also have the option to keep them as an attacker on your following turn.

Flanking is one of the best mechanics for aggro decks. A creature with the same power can’t just block an attacking creature that has the flanking ability. It would always have to be one stat bigger if your opponent wants to trade with you. Creatures with flanking will put your opponent in an awkward spot in defending and they’ll have a tough time managing their mana source to summon a “tough enough” blocker just to defend themselves.

Do you want a solution to discard effects? Do you want to remove that frustration from your game? Look no further! The madness mechanic is back.

Look at the value these cards bring to the table with Ichor Slick as a quick example. This combination of mechanics on a common card is great. Target creature gets -3/-3 and you draw cards for essentially six mana? What is this madness?

The kicker mechanic from Invasion makes a return once again in this remastered set. It basically gives you more if you pay more. You could say that other mechanics that give you the option to pay extra for more is a variation of kicker. You have the flexibility to plan our your moves like spending all your mana on one big effect or simply using it to play multiple spells in a turn. Whatever you need, you’ve got options.

Remember how powerful delve cards were? Well, they’re here to spice things up again! Basically, as you cast a card with delve, each card you exile from your graveyard pays for one mana of the card’s cost.

Take Tombstalker for example. It can be cast as early as turn 2 if you’ve got six cards in your graveyard. A 5/5 flyer on turn 2 is insane! If your opponent doesn’t draw a removal spell early, they’re doomed!

As a storm player in both Modern and Pioneer, it’s safe to say that I love this mechanic. It’s the best way to play in my opinion. How is that, you might ask? It’s the “watch me play” method. Just let your opponent watch you win while they do pretty much nothing.

Grapeshot and Empty the Warrens are the wincons of every Modern storm player, no matter what variation they play. If you see these cards in your opponent’s deck, you better hope they whiff their combos or you’re going to face either a bunch of goblins or a bunch of one damage copies of Grapeshot.

Every single booster pack contains one card from a “special sheet” that has cards with a different frame — Magic’s old frame! The idea is that you’ll be able to get cards that have never before been printed in this “old style” to pimp out your collection with a nostalgic flare.

There are 121 cards printed in this retro frame.

Each card in the set is a reprint from the Time Spiral block for most of the set. But the plan for reprints also includes more Modern-era cards from Magic’s history as an homage to the original timeshifted cards in the block. 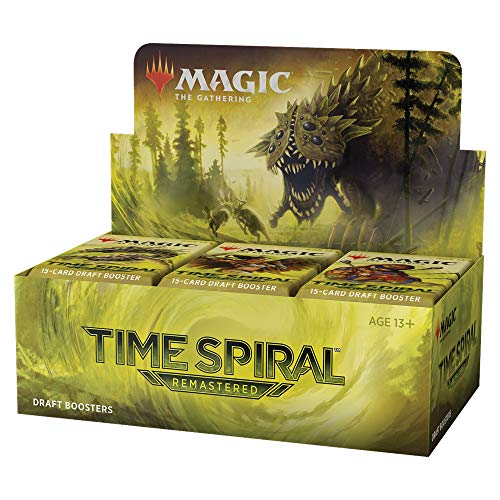 Look at that Tarmogoyf on the packaging!

Next up are the the typical 15-card draft boosters. These are perfect for both collecting and drafting.

This being a premium product with an emphasis on high-value reprints, the price of a box is a bit higher than usual: 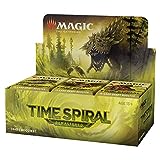 If the price of a box is looking a little too pricey for you right now, you can also buy a 3 pack bundle of draft boosters for a much lower price: 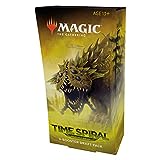 Your local game store is going to be the best place to buy Time Spiral Remastered. It’s a paper-focused set so playing online isn’t as much of an option this time around. That said, COVID-19 is still an issue that can’t be ignored. Hopefully we’ll see more online events and availability.

While it would be fantastic to support your LGS, please consider your safety first and foremost. If you don’t want to be out and about or your LGS isn’t open to buy from, it shouldn’t be too hard to track down some product on sites like Card Kingdom, TCG Player, or Amazon.

As we’ve witnessed the return of cards in this set, it’s really hard for us to contain the excitement that’s flowing in our blood to get our hands on this marvelous remastered set. The nostalgia it’s bringing is simply mouth-watering and we can’t wait to play it!

What about you? Are there any favorite cards from Time Spiral you’re dying to open in packs again? Or maybe you have a favorite Modern card you want to collect more of or have the chance to open? Whatever it may be, go ahead and discuss in the comments what you’re excited for!

As always, if you’re looking for more content from us then check out our blog for tons of posts just waiting to be read. If you’re really enjoying our content and want to support us so we can keep making more, head over to our Patreon.

Stay safe and warm, and I’ll see you all next time! 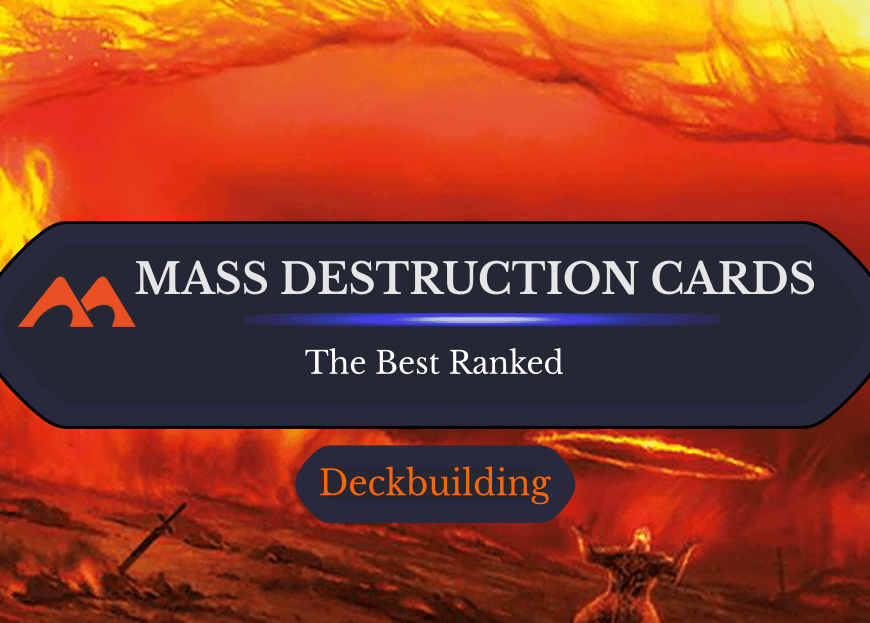 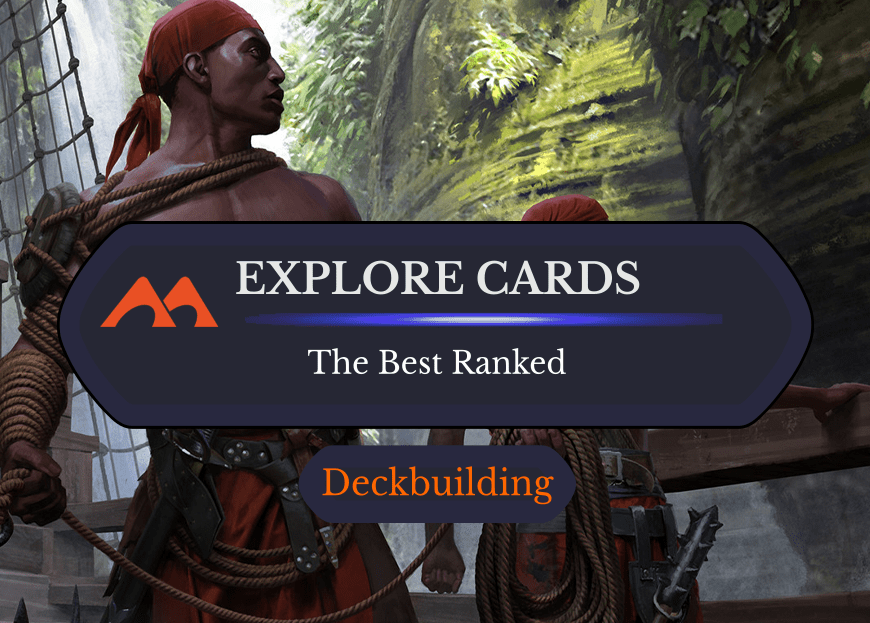 All 18 Explore Cards in Magic Ranked