HomeAlchemyAlchemy: Nobody Asked for It—or Its Collateral...

Alchemy: Nobody Asked for It—or Its Collateral Damage

In early December, Wizards unveiled the curtain on a brand new digital-only format for MTG Arena. We were greeted with this new reality in a turn of events that nobody really asked for; a digital-only format with a mix of “rebalanced” cards paired with format-exclusive cards. A “standardized Standard,” if you will.

Today I’m going to go on a little unscripted trip as I talk about game design and balance in the world of Magic when it comes to Alchemy, the new digital-only format. Ready? Let’s go!

What are the Balance Issues With Recent Sets?

It’s no secret that the last few sets have been wildly powerful, and not just cards like Oko, Thief of Crowns or Uro, Titan of Nature’s Wrath. Standard has seen more bannings than ever in the last few years. Heck, before 2018 we hadn’t even seen a card banned in Standard since 2011’s Jace, the Mind Sculptor and Stoneforge Mystic.

2018 saw the beginnings of an unbalanced format with several overly powerful cards and oppressive decks having key pieces banned to keep the format healthy. Emrakul, the Promised End and Felidar Guardian are notable inclusions, the latter being part of an in-block infinite combo.

2019 started strong with only Nexus of Fate being banned in BO1 matches. But towards the end of the year with the release of Core Set 2020 and Throne of Eldraine, we saw several bannings including Oko and other oppressive green cards.

2020 set the record for the most bans in Standard at 10 cards. The only years that came close to this are 1999 thanks to the Urza block and 2005 with artifact lands and stuff from Mirrodin with 8 cards banned each.

What Exactly Is Alchemy?

Wizards dropped an announcement of their new digital-only format “Alchemy” out of nowhere in early December 2021. In their words:

Alchemy is simply a new way to play. It offers another option for players who want a new metagame, new strategies to conquer, a faster rate of evolution and change in that metagame, and a format that can work like a digital game.

In reality this is Wizard’s attempt at a digital-first format. It features all the cards in the current Standard with a couple added bonuses. Each Standard set will have “Alchemy Packs,” which have Alchemy-only cards that are designed for digital player. Some cards will also be “rebalanced” versions of their Standard copies.

What Changes are Coming with Alchemy?

Alchemy brings not only its custom designed-for-digital packs but also rebalanced versions of existing cards. Yup, you heard it right. Nerfed versions of already-printed cards, because Wizards made an oopsie.

Don’t worry though! If WotC decides that a card needs to be rebalanced, you won’t get any wildcards for it. Because the card is still useable in another format i.e., Standard.

Alchemy’s card pool will also directly affect the Historic format. All Alchemy cards, including the rebalanced versions, will be what you can use in Historic.

Honestly, I couldn’t tell you.

Wizards hasn’t told us why Alchemy has to affect the Historic carpool, but I assume that it’s because they want a unified digital-only format for Arena where Alchemy players can enjoy their cards in a non-rotating format.

Is it a good idea? I don’t think so. Historic may not be my favorite format, but it’s nice to be able to play in a non-rotating format. But adding in rebalanced versions of cards nobody asked for isn’t the solution for the format.

Why Are There So Many New Formats?

It’s no secret that Wizards has been trying new ways to play Magic for some time now. Brawl came to us in 2018 with the launch of Dominaria, but we’d see three more formats introduced just a year later.

Duo Standard was WotC’s attempt to “spice up” competitive play and also take a page out of Hearthstone’s eSports book. It lasted for one tournament before being retired. I’d also note that the Duo Standard debrief mentions that a healthy format should “closely resemble your at-home experience,” which doesn’t work unless I start writing over my Goldspan Dragon with sharpies.

Historic was next, launching exclusively on Arena as an answer to players wanting a non-rotating format. Heck, it even replaced Draft as the second format for most competitive events in the last couple of years. It’s still fairly popular and boasts a healthy metagame.

Pioneer was announced soon after and even had its own Grand Prix. But Pioneer has fallen off the radar a bit thanks to Covid’s shutdown of nearly everything and Arena not supporting the huge swath of sets it would need to feature the format.

Hearthstone is exclusively designed for digital. There are no print versions of Hearthstone cards and the game was designed around digital card game mechanics. We’ve seen a lot of those Hearthstone mechanics transfer over to Arena with their designed-for-digital cards, too.

Perpetual effects, spellbooks, and conjuring are all mechanics pulled directly from Hearthstone. It’s not a bad thing to borrow mechanics from other games, just like Hearthstone has also borrowed from Magic.

But a majority of these new cards in Alchemy add a lot of unpredictability to a game that’s always rewarded players who knew cards and interactions better. A lot of these new abilities are completely random so players can’t guess what’s going to happen next.

What Happened to Pioneer on Arena?

Pioneer was originally going to be brought to Arena. Crazy, right?

Instead of a full 20-or-so sets being added overnight, we were told there would be a “Pioneer Masters” set that would feature a ton of Pioneer-legal cards. We weren’t really told how that would work or whether Wizards would just drip feed remastered sets like Amonkhet Remastered.

This set was supposed to be added to Arena eventually, but it was “paused” with the release of Forgotten Realms. WotC cited that it was because Historic was becoming a “unique and compelling format,” which I guess translates to “abandon the other format.” I assume it was put on hold to work on Alchemy which directly impacts Historic.

We don’t know if or when Wizards will restart work on implementing Pioneer Masters, but I don’t expect to see it come along anytime soon. Or at all.

Magic has been around for over 25 years now. It’s the original TCG and most other TCGs out there emulate it in some way. But with the new digital age upon us, there’s been a problem with balancing the game.

WotC has always used its in-house R&D team to playtest and balance cards. In 2017 they created the Competitive Play Design team after missing an infinite combo in the Kaladesh block. This team consists of 11 people who are in charge of playtesting an entire Standard rotation. And it worked for a long time (to a degree). But they face a much larger issue now:

How can you have a small team playtest a set when there are more matches played on Arena in a week than R&D will have in a full development cycle?

One of the biggest issues with balance is that formats are “solved” so much faster than R&D probably ever expected. Pro players don’t need to collect all of a set’s cards and playtest over weeks before the next PTQ. They can just crack some wildcards and play with that deck for 15+ matches a day, every day, with a variety of players.

I don’t think that R&D expected this change when MTGA was released, or how it would affect competitive play.

What’s Going To Happen With Other Formats?

Standard isn’t going anywhere and it never will. Regardless of how you feel, it’s the second most popular format (thanks Commander). But other formats might eventually see some stagnation.

Brawl was never really a hit in my eyes. It’s like a watered-down version of Commander with cards that rotate. Historic Brawl is a little more my speed, but we may see some balance issues there with Alchemy cards affecting the format.

Historic will still remain popular but I’m not sure how the format will change. Since Wizards can rebalance a card at any time we may not see top decks last for long. Powerful cards can be changed in a heartbeat, which makes me uneasy.

Pioneer has a somewhat healthy player base on MTGO, but it’s tough to guess how long it will last with the larger community on Arena. Hopefully we hear good news about the format in the coming months.

What About My Wildcards?

Sadly, this is not good news.

But what about when a card you own gets rebalanced later?

We’ve been told that wildcards will not be issued when a card gets rebalanced, though I can’t find anything in the press releases from WotC. But this is still a huge problem. Why should my Historic deck get nerfed because an Alchemy interaction is too good for Standard?

Blizzard gives Hearthstone players a 2-week window to refund cards for dust (the game’s currency for crafting cards) when they nerf cards. No matter the reason behind the change, they always offer a refund opportunity for those who want it, regardless of the impact.

The benefit of an eternal format is that the other cards in the pool allow better options to interact with. Strong cards in Standard almost always make little to no impact in Modern and Legacy because they have the better tools to deal with it.

Is Alchemy a Good Idea?

I don’t care much for Alchemy. I think that a designed-for-digital card game is not what I asked for. If I wanted that I’d play one of the ones that’s already out there.

I play Arena because I love playing Magic. I play paper Commander once a week with my friends. I’ve been playing for over a decade. I’ll probably always play in some form.

But I don’t like these ideas Wizards keeps coming up with. Digital-only cards are fine, but designed-for-digital is a whole other issue. And the fact that it affects formats that have no business being involved is astounding to me.

Wrapping Up the Rant

I don’t like Alchemy. I figured you got that by now. It’s a poor choice by Wizards to introduce a format that nobody asked for when players have been asking for Modern and Pioneer on Arena since day one. Anti-consumerism by incentivizing players to spend more to buy cards for Historic and Alchemy is a horrible idea, and bad for players’ wallets.

The format itself isn’t really a problem. It’s not for me, but it’s not inherently bad. But the way Wizards has chosen to shake off player demands to push a format nobody wanted is bizarre and right up WotC’s alley.

How do you feel about the format? Are you keen to try it out? Do you wish they’d done something else instead? Do you just wanna disagree with me? Let me know in the comments or reach out to us on Discord.

And if you need some free assistance while playing on MTGA, check out Arena Tutor. It’s awesome.

That’s all for me. I’m currently battling a cold and am a third of the way through Doom Eternal. Wash your hands, keep your cards sleeved, and never riffle shuffle. See you in the next one! 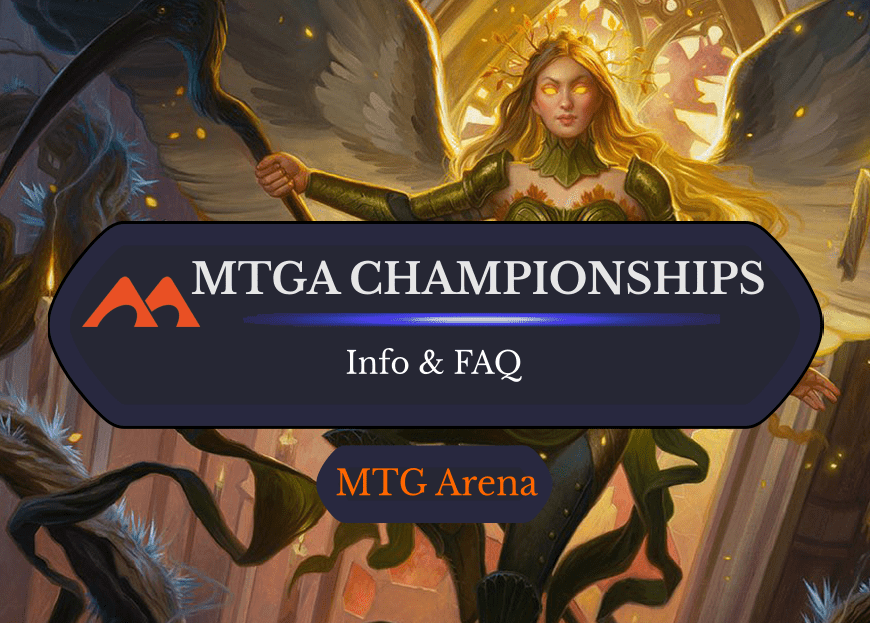 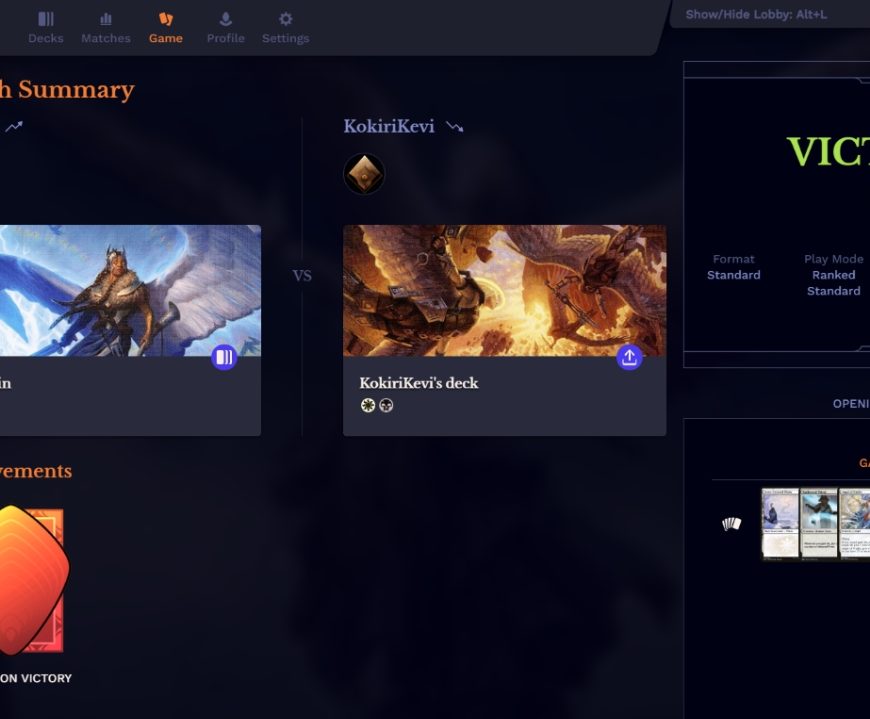